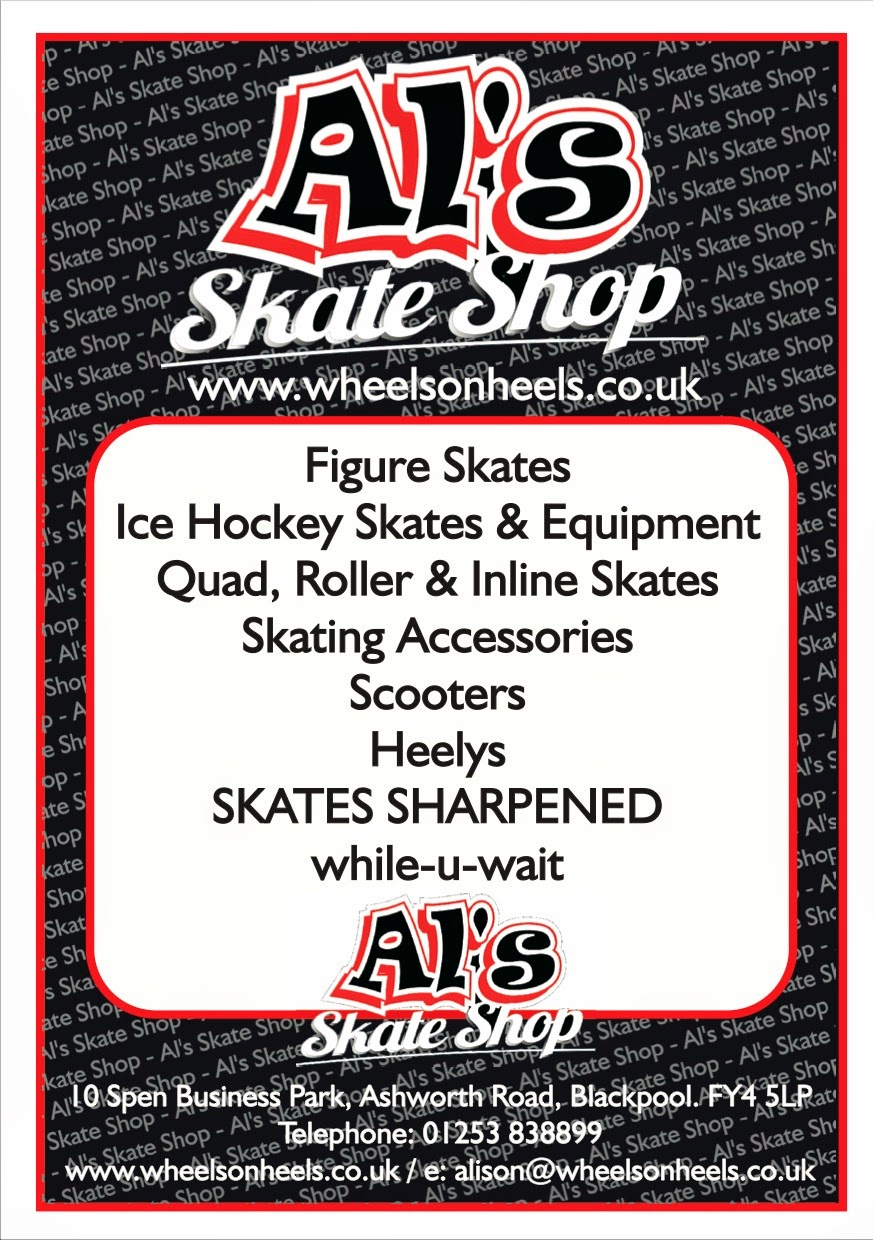 We are really excited that Ice Hockey Review will include all teams from NIHL North & South 1 & 2 for the first time this year.


In other words, we now have a publication that will be read by ice hockey fans located as far as Solway / Dumfries and beyond in Scotland all the way down to the Isle of Wight and other south coast venues. From Bristol in the south west to Whitley in the North East and from Medway in Kent up to Blackburn, Deeside and Manchester in the North west.


That’s an absolutely huge area covered and, with London, Nottingham, Sheffield and the Midlands hockey hotbed in there as well, we think that Ice Hockey Review is great place to get your company’s message out to the right people.


As this is the first truly “national” edition of our NIHL yearbook, we have some very special never-to-be-repeated offers for new advertisers.  Plus - the good news is that if you advertise this year, you’ll get a special rate next year as well as a returning customer.  All advertising pages this year are black and white with half or full pages available.

You can send us camera-ready art work or just a logo and some text and we’ll put your advert in the place you prefer – next to your favourite team or in some other position of prominence within the book.


And if you are a retailer, skate shop or hockey equipment supplier who wants to stock copies of the Ice Hockey Review NIHL 2014 yearbook, we’ll be happy to discuss wholesaler terms as well as reduced advertising rates.


To find out more, drop us a line to:   ADVERTISING ENQUIRY
Regional Representatives: 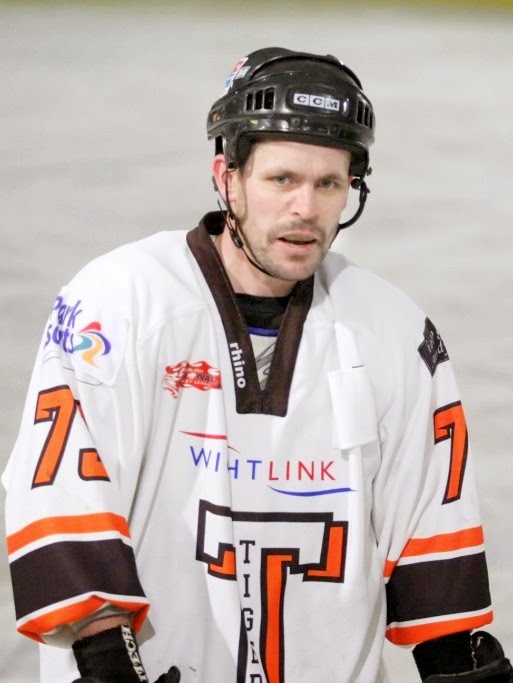 We are pleased to announce that Chris Randall has joined the Ice Hockey Review editorial team overviewing the goings on in NIHL South.

Chris played competitive hockey for Wightlink Tigers for 6 years and is now player coach for the Solent Hawks rec team.   He has previously written for Powerplay magazine and Pro Hockey News and is a very welcome addition to the team.

Chris is also handling physical sales of the 2014 Ice Hockey Review yearbook on the Isle of Wight and south coast area so if you are interested in reserving your copy, drop him a line via the link on the right of this page.

Hockey fans in the north east will be able to get their copies from Chris Mackenzie at Whitley as last year and we also hope to have copies available once again at various NIHL rinks on match nights.

Copies will also be available via mail order as well. Links will be posted shortly where pre-launch orders can be placed.

Play Off Venues Confirmed For Next Season 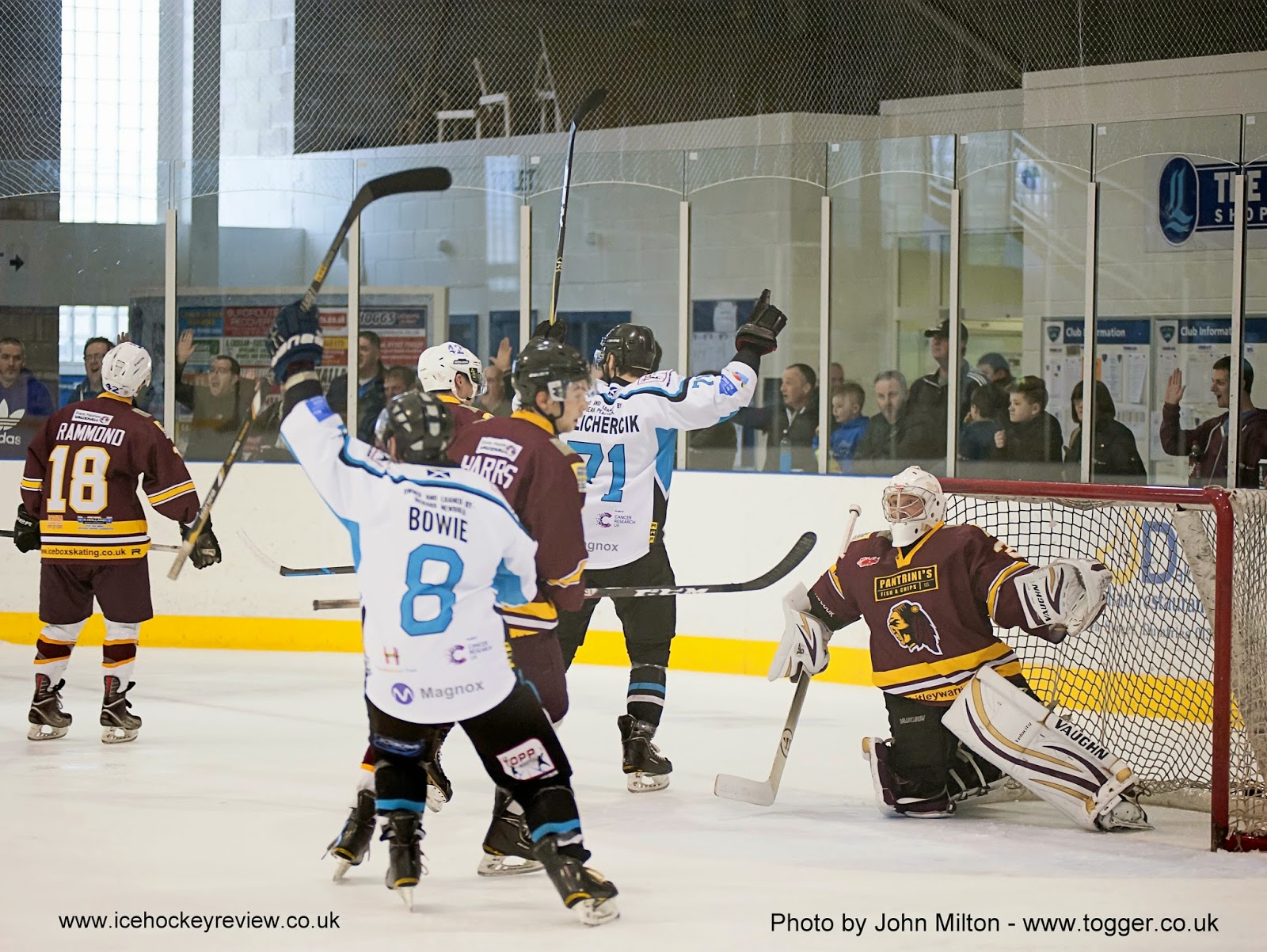 At this weekend's EIHA AGM in Nottingham, Solway and Solihull were voted as the venues for this 2014/15 season's Moralee D1 and Laidler D2 play off weekends respectively.

Representatives of all clubs from Laidler D2 and Moralee D1 both unanimously voted for their respective 2015 play off weekend venues, with Solihull and Solway remaining as hosts for a second season running.

The current formats will remain the same, whilst the dates are still to be confirmed but both weekends are likely to be organised for similar dates as last season's tournaments.

In other developments, it has been announced that all EIHA referees will wear video/audio recording equipment on their helmets during all 2014/15 NIHL games, in order to assist them with any relevant disciplinary matters. 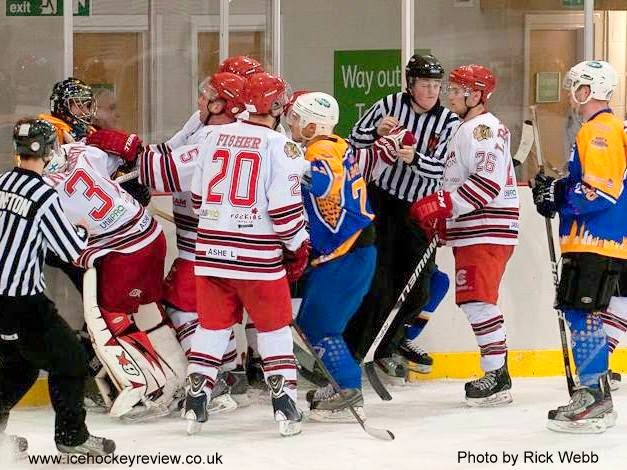 Following an in-depth investigation into the unsavoury scenes that led to the NIHL South 1 Play Off Quarter Final match between Streatham Redskins and London Raiders being abandoned after 2 periods in April, the EIHA has handed out the following bans:


Both Parke and Tarczycki served their suspensions in the play-off semi final against Chelmsford so will be free to play from the start of the new season.
The Raiders have the opportunity to appeal against the longer bans for their players.
Raiders netminder Frankie Sabine was released by the club immediately after the incident.
Photo by Rick Webb (note: not from the match in question)
Posted by Paul & Lucy at 20:25 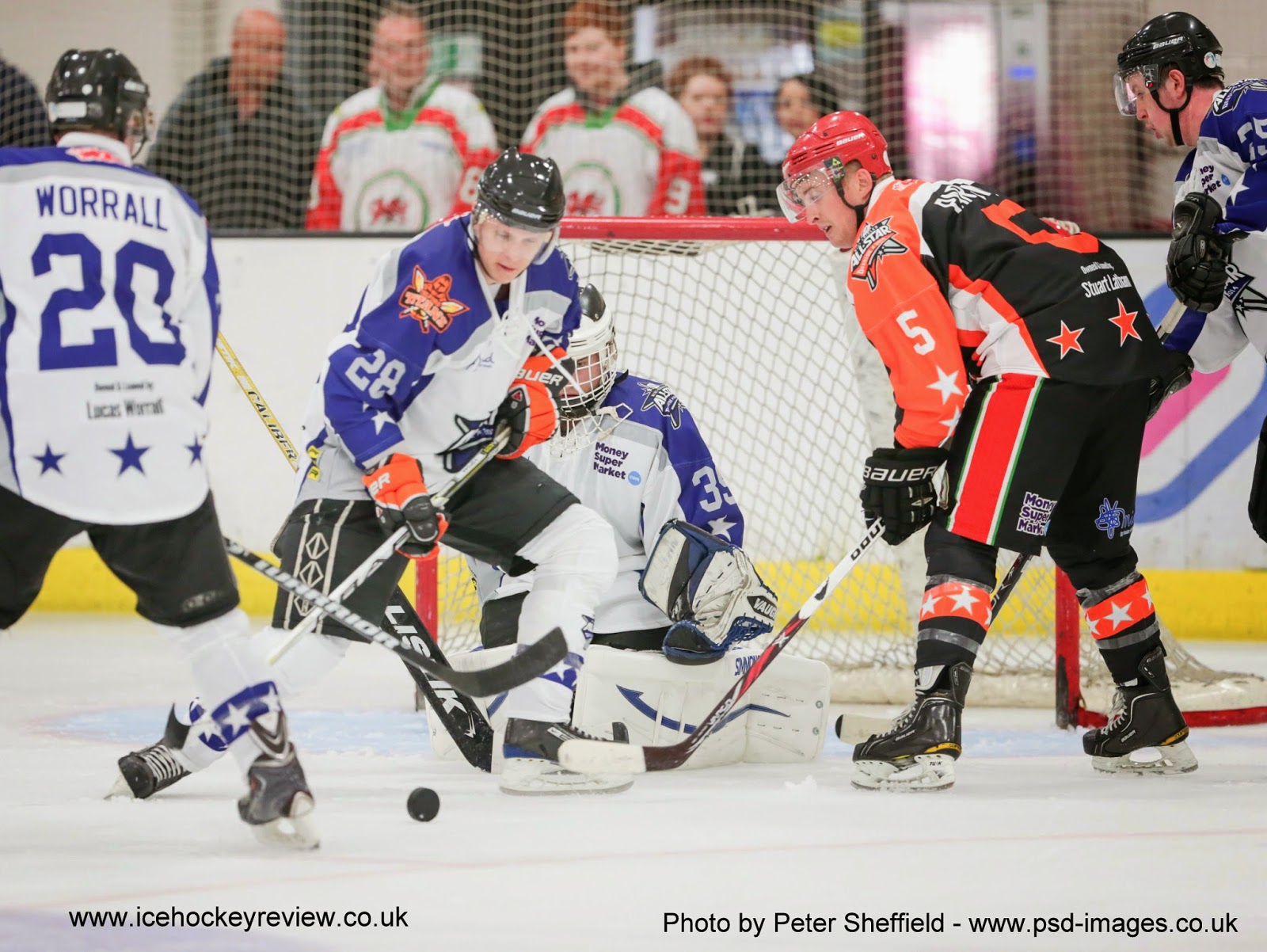 But also:
Deeside Dragons fan Michelle Dark had her head shaved in the centre circle at a Dragons home game last  season to raise funds for the charity.

She raised £450 which was matched by sponsors Money Supermarket to add an extra £900 to the total collected for the MIND charity. 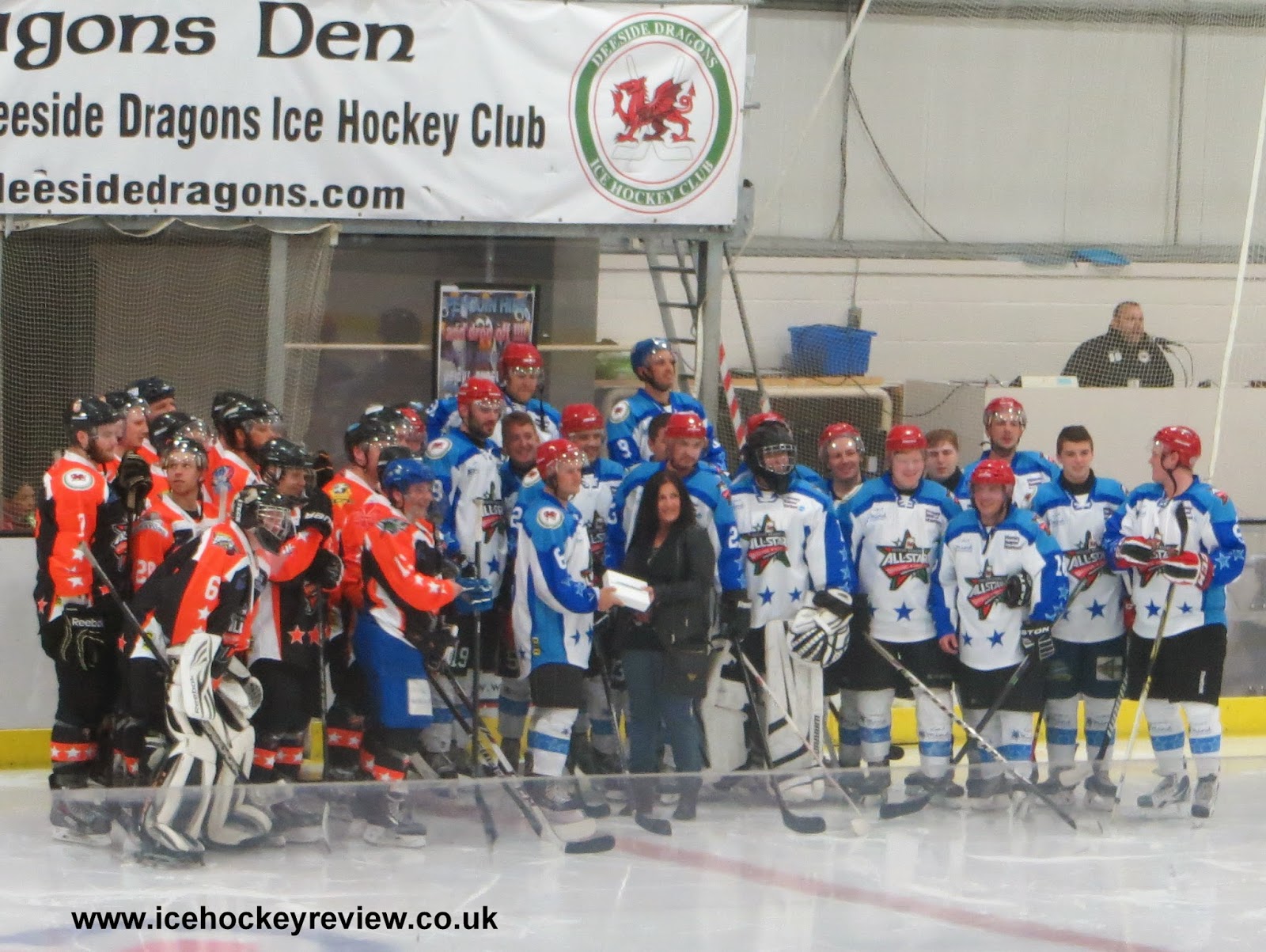 Report and photos to follow - please check back!
Posted by Paul & Lucy at 21:22

Relegation & Promotion Back For NIHL North

The EIHA have confirmed the reintroduction of promotion and relegation between the Moralee and Laidler Conferences, for the 2014/15 NIHL North season.

The decision was made after a vote of all the member clubs, at the EIHA meeting in Wetherby.

The team finishing bottom of NIHL Moralee D1 will be automatically relegated to NIHL Laidler D2, with the second-bottom side playing a two-legged promotion/relegation play off against the runners up in NIHL Laidler D2.


Both the Moralee and Laidler will retain their individual, end of season play off weekends, with the formats remaining the same as last season and the venues and dates to be announced at a later date.
Currently, all teams will remain in the the same conferences as last season but with the possibility of two new teams entering the league before the new campaign begins in September, this may be subject to change
Posted by Paul & Lucy at 15:44