The Widnes-based Riverside Raiders team beat Trafford Thunder 7-3 in a charity game that raised over £450 for the Christie Hospital Charitable Fund at Planet Ice Widnes on Sunday.

As well as helping to raise money for a very worthy cause, the game also acted a warm up for the Raiders’ Summer Cup games which will be staged at the Widnes rink during June and July.

After very even and closely contested opening phase, James Kelly put the home side ahead in the 8th minute and Jordan Birtwistle doubled the advantage just 49 seconds later.

The Thunder pulled a goal back early in the second period but Jack Walker restored the two-goal cushion for the Raiders on 25 minutes. Another Trafford goal narrowed the gap again but three unanswered goals from Mike Parkin, Kelly again and Daniel Trust handed the home side a 6-2 lead at the second period break.

Trafford pulled the game back to 6-3 with a quick goal just 7 seconds into the third period and then the Raiders’ Mike Parkin added his second goal of the game while being pushed into the goal net on top of the Trafford netminder. This caused a bit of discussion on the ice but the match official adjudged that the puck had crossed the line before the net had come off its moorings.

That rounded off the scoring for the game and the Raiders were able to celebrate a 7-3 victory over their local rivals. With a raffle, cake sale and bucket collection, the sizeable crowd generously helped to raise over £450 for the Christie Hospital Charitable Fund.

The Riverside Raiders are next in action on Sunday 9th June when they take on the Deeside-based Flintshire Phantoms in the Summer Cup at Planet Ice Widnes. Face off is at 4.30pm and admission is free.

The Widnes Wild women’s team will be cheered onto the ice with a brand new song that has been especially written for them whey they play the last home game in their turbulent WPL season this Sunday 19th May against the Sheffield Shadows at Planet Ice Widnes – 5.30pm face off.

The song – entitled "The Girls…!" - has been written by the Wild’s Poet In Residence Lucy London who has been a keen follower of women’s sports for many years and has been particularly impressed by the attitude of the struggling Wild women’s team this season.

The women’s team have lost all of their league games to date after losing a large number of long-standing players during the summer and taking on a whole new squad of inexperienced players in a bold experiment in team building to help secure the club’s longer term future.

Talking about how the song came about, Lucy said:

"I am always coming up with ideas, jotting down lines for poems and songs and I like to write things to support the various ice hockey teams at Widnes."

"At a recent women’s team match, somebody from the visiting team expressed surprise that we were putting so much effort into the game day experience as it was "only women…". "

"I immediately put him straight and told him that we don’t differentiate at Widnes and that we try and put on the same show, it be men’s games, women’s games, junior games or rec games. However, it still irked me for a few days afterwards and in the end, I came up with the words to a song to celebrate women’s involvement in sport." 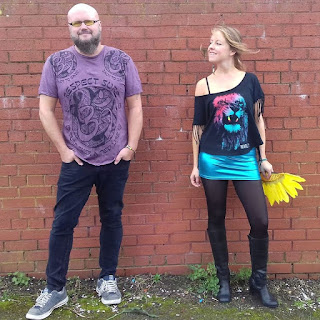 Determined that the song should be a rousing anthem to help cheer the Wild women on, Lucy contacted Canadian musician friends Jason Moon and Jaime April – originally from Prince Albert, Saskatchewan, but now residing in Liverpool - to help out with the tune.

Jason and Jaime (pictured left)  came up with a superb rousing tune to go with the lyrics and also produced a professional recording of the song to be played at the Wild Women’s team’s future home games at Planet Ice Widnes.

You can hear the song at the Wild women’s game on Sunday – face off 5.30pm - or, if you can’t wait that long, you can also listen to it now on Soundcloud by clicking on the link below.

Jason and Jaime also play in the bands April Moon and Wooden Rocket and can regularly be seen playing live around the North West and beyond.