Defenceman Mike Jones will make a welcome return to The Dragons next season – the latest home-grown star to agree terms with Head Coach Lol Paul.


The 27-year-old has spent the majority of his senior career with the Flintshire outfit, apart from short spells in Turkey, Invicta and at Telford.


And for Paul, a strong line-up at the back gives him extra choice in choosing goalscorers, ahead of the new Laidler Conference season.


He said: “Mike Jones is a player who has always been a rock for us, and adds stability to an already strong defence. Again, he displays total commitment in games.

“Money can’t buy that sort of attitude, so I had no hesitations in bringing him back. Mike forms great partnerships with whoever he’s playing alongside in defence.


“The fact that we’ve now got five extremely good defencemen means I can start looking at bringing in more forwards. These guys will be the bedrock of my team.”


That bid for quality is set to continue throughout the off-season, as the Dragons chief assembles a roster capable of challenging for honours.


He added: “We are talking to a number of players, who have been great servants of this club. I want to keep that local link to The Dragons.


“But I have also got my eye on several new guys, including an import who will be a real statement of intent in this league. I want to build an absolutely lethal line-up of forwards.


“The fans here at Deeside are in for a real treat next season. My brief is to build an exciting, powerful team. And I fully intend to do that.”​

More info from www.deesidedragons.co.uk
Posted by Paul & Lucy at 20:20 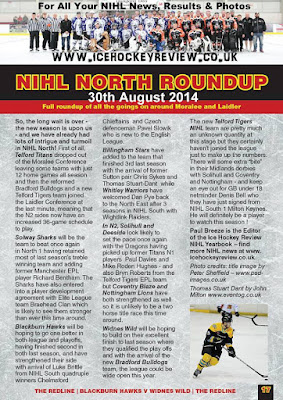 
We are pleased to advise that, once again, we will be making our weekly NIHL Moralee and Laidler Conference round ups available for use in match night programmes for all NIHL North teams.


All the weekend action in encompassed in a couple of well written paragraph and provided with an action photo (featuring a team other than your own).  The idea is to be able to offer a variety of content for your match programme readers on a regular basis and this service is - of course -  completely free of charge.

Text is provided as a word document and images as jpegs so that you can fit them easily into your own page layout.


This arrangement worked very well for coverage of teams in NIHL North Division 1 & 2 last season. If there is enough interest from teams in NIHL South this year, we’ll be more than happy to produce an NIHL South version as well


Drop us a message for more details CLICK HERE TO EMAIL
Image: an example from the Blackburn Hawks North 1 Moralee Conference match programme from the 2014/15 season
Posted by Paul & Lucy at 20:08 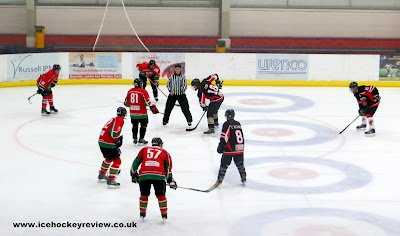 
The term “a game of two halves” is normally applied to football but that is definitely what we got last night – even though the match was, in fact, divided into the usual three periods.


Having been trounced 4-13 at home by the Grimsby Ice Bears in their last match, Deeside Demons were quickest off the blocks for this encounter with near rivals Widnes Wildcats.


The first period was pretty close - although the home team did have a little more of the play and did deserve their 1-0 lead at the first break.


In the second period they pulled away and looked to be coasting to an easy victory at 4-0 up but then the Wildcats seemed to get their act well and truly together.  They pulled back two quick goals and found themselves with a 5- on-3 advantage going into the 3rd period.


The Wildcats pulled another goal back during this powerplay to make it 4-3 but the Demons struck again to maintain their 2 goal cushion.  The action was anything but “recreational” during this last third and while the Demons did their best to keep them out, the Wildcats really had their tails up by then and struck two more goals to tie the score at 5-5 with 5 minutes to go.


No more goals were forthcoming and we were treated to a nail-biting climax in the shape of a penalty shoot-out. The tension on the ice could be felt in the stands and one poor Demon actually got himself binned by the Referee during the shoot-out for breaking his stick against the boards in frustration.


And the game ended with the Widnes netminder Barry Sprakes buried under a pile of celebrating teammates for having stopped all penalty shots that he faced.


The Deeside Demons are at home against this Sunday in a cup game against the Riverside Raiders of Widnes who they beat  away  2-13 back in June.  The match faces off at 6.30 pm at Deeside Leisure Centre and admission is free.


The Widnes Wildcats are next at home on Sunday 2nd August when they take on the Sheffield Ice Tigers in a 7.30pm  face off.

We here at Ice Hockey Review are thrilled to be able to announce that Red Hockey Ltd have agreed to sponsor the 2015 NIHL Yearbook.


In practical terms, their financial support will enable us to put together a more professional looking final product than has been possible in previous years, with glossy paper for the inside pages and the inclusion of colour photographs for the first time.


Editorially, the 2015 yearbook still has the same writing team – with a few new contributors - and will continue to be the only publication on the planet that covers the NIHL North and South in full team by team and league by league detail.

The sponsorship deal is the culmination of lots of hard work on the part of NIHL South Editor Chris Randall who has been working tirelessly to help attract backers for the publication as well as producing his NIHL South 1&2 write-ups.


Paul Baker, Director of Red Hockey, said: "Sponsoring the NIHL Yearbook is a great way of cementing our links with teams across the UK ice hockey community. When we were approached by the publishers, it was a very easy decision to make.


"Giving ice hockey a sustainable platform for the future is Red Hockey's main priority. Ice hockey is a wonderful sport, and we want as many people as possible to enjoy it.


"Everyone at Red Hockey is delighted that a quality publication like the NIHL Yearbook can now go from strength to strength."


The Ice Hockey Review 2015 NIHL Yearbook will be available to buy online and at ice rinks, sports shops and other outlets from the end of September – with personal sales also available through NIHL South editor Chris Randall on the Isle of Wight and NIHL North Editor Chris Mackenzie in the North East.


A special pre-launch offer price is also available by following the link at the right of the page.

Limited advertising slots are still available in colour or black and white for the 2015 yearbook - drop us a line for details.
Posted by Paul & Lucy at 20:28

Book Review: Travels In The Australian Ice Hockey League by Will Brodie 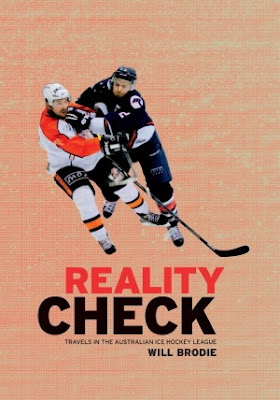 
Here’s an interesting book about our favourite sport – ice hockey – in Australia. Yes - they do play it down under and I knew that already as Team GB has played Australia in the past in World Championships.


Also the Peterborough Pirates (that’s Peterborough, England – not Peterborough, Victoria or Peterborough, South Australia, by the way..) once had a player called John Oddy who had come over from the Adelaide Avalanche club and, after a quick flick through the index of Reality Check, I discover that there is a Greg Oddy who is the current captain of the modern day Adelaide Adrenaline club - so there must be some sort of family connection there.


What Will Brodie sets out to in this book is to follow the Australian Ice Hockey League through a complete season and it starts in January 2014 just as preparations for the new campaign are getting under way (more about this in a bit..).

I haven’t read all of this book as yet as it is quite a substantial read and I am currently trying to get the 2015 Ice Hockey Review NIHL Yearbook ready for publication but the bits that I have read so far have been fascinating.


For example, matches in the AIHL are played over 2x 15 minute period and 1 x 20 minute period.  Apparently, this is to save costs on ice time although as every drawn game in decided by a penalty shootout at the end, I would have thought that the time taken to do that would negate any times saved by having shorter periods. Anyway, it’s their league…!


Another interesting fact is that NOBODY GETS PAID in the AIHL – not players, not coaches, not administrators, nobody. There are sponsorship deals and such things that help with accommodation, cars etc. for major players but apart from that, everything is done on  apart time voluntary basis and that means that games are played purely at weekends.


Despite the fact that the AIHL is not awash with cash, the league still manages to attract a decent level of overseas player to play there – and many of them just go for the love of the game and the opportunity of spending some time in Australia. The other bonus is that the Aussie season runs from April to September (that’s their winter…) so it coincides almost exactly with the close season of the semi-pro leagues in North America.  Therefore players can go and play for a season in Oz thus helping their keep up their fitness levels and match sharpness.


It is written in the form of a diary and Will travels across the country covering the various AIHL clubs and talking to all sorts of fascinating people on the way.  Now: if you are looking for book full of stats and figures, this is not it – but if you’d like a leisurely read through how they run and play ice hockey on another continent, then this book is definitely for you.


And to bring the story up to date, Will Brodie will be contributing an article on the 2015 AIHL season to this year’s Ice Hockey Review Yearbook as well.


In the meantime, you can keep up with Will’s various projects on his own website at www.willbrodie.com and you can buy Reality Check: Travels in the Australian Ice Hockey League by following the link HERE