The Deeside based Flintshire Phantoms started their Summer Classic Cup campaign with an 8-1 win over Wyre Seagulls.

You can read a full match report HERE

The Phantoms have announced more Summer Classic Cup fixtures and some challenge matches as well. These are listed below.

To Be Arranged:
Riverside Raiders (home)

And take a look at the official Summer Classic Cup website HERE
Posted by Paul & Lucy at 18:44 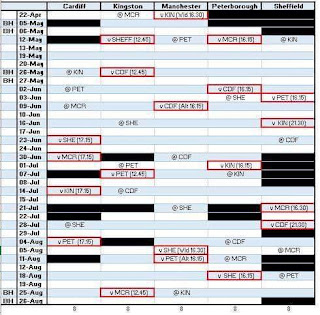 The fixtures have been announced for the 2018 British Para Ice Hockey League competition and the season opens with a bang at Widnes on Sunday 22nd April with a clash between last season's league champions Kingston and last season's Play Off Champions Manchester Mayhem.

Last season's league meeting between the two teams at Widnes was certainly one to remember and we hope that all the Mayhem's games this summer are equally as entertaining.

Following the season opener at Widnes on 22nd April, the Mayhem play a home fixture at Altrincham on 9th June against Cardiff.

They then have another match at Widnes on Sunday 5th August against Sheffield before facing Peterborough at Altrincham on 11th August.

The full list of Manchester Mayhem fixtures for 2018 is shown below (home games in bold):

League fixtures for all teams can be found on the incredibly clever graphic above (produced by someone else - not us...) - click on it to see a clearer version.
Posted by Paul & Lucy at 20:26

The Widnes-based Halton Huskies recreational team notched up a sensational 11-9 win in a 20-goal thriller against the Whitley Bay Sharks on Sunday evening. Having trailed 2-5 at the end of the first period, they won both the second and third periods to take the win in what was a highly entertaining and well-spirited game throughout.

The visitors took a shock lead just 90 seconds into the game through Kieran Buckley and Thomas Evans increased their lead with a second goal on 4 minutes.

The Huskies managed to pull level with goals from Michael Parkin on 9 minutes and James Kelly on 13 minutes but 3 goals from the Sharks in the space of two minutes towards the end of the period – from Greg Scott, Buckley again and then Chris Buckley - gave the visitors an impressive 2-5 lead heading into the first break.

The Huskies upped their game in the second period and pulled two goals back – a shorthanded effort by Anthony Hughes after 23 minutes and Jeff Chapman – Watson on 29 minutes. The Sharks edged further ahead again with a hat-trick goal from Kieran Buckley in the 32nd minute but 3 more for the home side – from Chapman-Watson, Nathan Hewitt and Anna Barnett gave the Widnes-based team a narrow 7-6 lead after two periods.

The Sharks tied the score with a Jerzy Jochimek goal just 18 seconds into the third period but 2 goals from the Huskies – from Anthony Hughes and Richard Evans put some daylight between the two teams at 9-7. A strike from Sharks’ Christopher Porthouse on 48 minutes closed the gap back to just one goal but a goal from James Kelly on 52 minutes restored the two-goal advantage of the Huskies. Jeff Chapman-Watson scored his hat-trick goal for Halton to give the Huskies an 11-8 lead with 4 minutes left to play.

However, just 15 seconds later, Chris Buckley scored his second goal of the night for the Sharks to reduce the margin to just two goals. The Huskies defended well to keep out a late surge by the Sharks and, in highly tense final 60 seconds, Whitley pulled their netminder in favour of an extra attacker but it was to no avail and the score remained 11-9 to the home side at the final buzzer.

The Halton Huskies are at home again this Sunday 25th February when they play Sheffield Ice Tigers in a challenge game at Planet Ice Widnes.  Face off is at 8.30pm and admission is free.


The Halton Huskies travelled across the country to North Lincolnshire to take on the Grimsby Stormers in what turned out to be a fascinating 29-goal game. Unfortunately for the Widnes-based team, 26 of those goals ended up in their own net and, while the final score might look rather one-sided, it was useful experience for the Huskies against notably stronger opposition.

The Huskies actually scored first – just 97 seconds intro the game with a well taken solo effort from Edward Ridding - but by the time Michael Parkin scored their second at 11.13, the Stormers had already fired in 5 goals of their own to take an unassailable lead. 4 more goals followed for the Grimsby team – including 3 within 33 seconds of each in the last minute of the period, to give the Stormers an impressive 9-2 lead at the first break.

Two more goals just 13 seconds apart at the start of the second period set the tone for the rest of the game and the Stormers were leading 19-2 by the time that the Huskies scored their third goal – through James Kelly in the 38th minute. Grimsby found time for another goal before the second break and took a 20-3 lead into the third period.

The Stormers scored again just 38 seconds into the third period and added two more in the next 60 seconds. The Huskies actually managed to shut up shop after that and kept the marauding home side down to just 3 more goals in the remaining 18 or so minutes in what was their best phase of play, although they were defending for much of the time and had very few shots on goal.

Top scorer for the Stormers was Jason Haigh with 12+0 while Ashley Hame contributed 5+3 and Luke Clark 4+7.

The Halton Huskies have more games arranged over the next few weeks:

Home games are played at the Silver Blades / Planet Ice rink at Widnes and admission is free!