The Widnes-based Riverside Raiders ice hockey team won their first ever piece of silverware at the weekend when they beat Grimsby Stormers 5-3 in the Puckstop Summer Classic Play Off trophy final at iceSheffield.


The Raiders had progressed from a 5-team qualifying group and then beat the Wyre Seagulls in the semi-final to get to the final where they took on the team from Lincolnshire.


They took the lead in the 12th minute of the game with a goal from Sam Plant and were 2-0 up at the end of the first period after a 16th minute strike by Adam Jenkins doubled their lead.


The Stormers were quickest out of the blocks in the second period and pulled a goal back just 3 minutes from the restart through Lubo Svatojansky.  Sam Plant hit back for the Raiders just 2 minutes later to restore the two goal advantage but another Grimsby goal at the half way mark (Clark) kept the league champions in contention.


Sam Plant’s third goal of the game came just 30 seconds later to calm Raiders’ nerves and then a goal from Gez Evans towards the end of the period left the scoreline looking much healthier from a Raiders point of view at 2-5 after 40 minutes of play.


The Stormers struck again just 3 minutes into the 3rd period to pull the score back to 3-5 and there followed an incredibly tense phase of Grimsby pressure and Raiders defence.  In their enthusiasm to mount a late challenge, the Stormers picked up a raft of penalties in the last period which effectively put an end to their chances and the Raiders played a solid defensive game to close thing down until  the final buzzer.


The playoff win was a fitting reward for the Raiders players and supporters who had played well throughout this competition and only missed out on the league title on goal difference after finishing level with Grimsby on points in the group table.


The Manchester Mayhem Para Ice Hockey Team ended the regular season on the wrong end of 2-5 defeat after a hard-fought and spirited performance against league champions Kingston Kestrels at Silver Blades Widnes on Sunday.


The Hull based team had already secured the league title several weeks ago but were hoping to make history by becoming the first team to complete the season with a 100% record, while the Mayhem were hoping to build on their previous win against Peterborough to build up some momentum heading into the end of season play offs in September.


The Kestrels took the lead as early as the 17th second of the game with a goal from Matt Woollias and it was 0-2 just 2½ minutes later when Woollias set up Matt Clarkson to double the Kingston advantage.


The Mayhem battled hard and had a few chances of their own but were unable to break down the solid Kingston defence.


It was a similar story in the second period where Manchester failed to make the most of their opportunities while the Kestrels extended their lead with goals from Simon Berry on 20 minutes and then Woollias again on 28 minutes.


Whatever was said during the team talk during the second break certainly had an effect as the Mayhem looked a changed side in the 3rd period.  Karl Nicholson fired in the first Manchester goal just 90 seconds from the restart and then struck again a minute later to halve the deficit to 2-4 with 12½ minutes still to play.


This resurgence was not to last, however,  as just 30 seconds after scoring his second goal, Nicholson was caught up in an altercation with some Kestrels players against the boards behind the Kingston goal.


The fracas escalated and resulted in a 10 minute stoppage in play while various skirmishes ensued and grievances were aired and dealt with.


The result of all this was a 2+2+10 minute penalty for fighting for Nicholson and a 2+2 for Kingston’s Clarkson for his role in the original incident. This decision saw Nicholson banished for the rest of the match and, as he was the leading player for the Mayhem, effectively ruled out any chance of them getting back into the game.


Clarkson scored Kingston’s 5th goal on 41 minutes and, try as they might, the Manchester players were unable to make any further breakthrough.


So Kingston finish the regular season with 8 wins form their 8 games – the first time any team has done that.  But Manchester could still get a chance to have the last laugh over the Kestrels in the play offs when then two teams could meet again - depending on eventual league finishing positions - at Hull Arena over the weekend of  2nd & 3rd September.
Posted by Paul & Lucy at 14:32

Puckstop Summer Classic: Stormers to Take on Raiders in Play Off Final 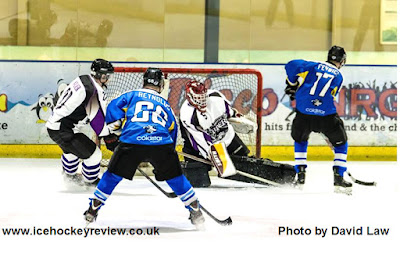 The 2017 Puckstop.com Summer Classic reaches its climax this Sunday 20th August when the Grimsby Stormers take on the Widnes-based Riverside Raiders in the play-off final at iceSheffield – 4.15pm face off.


Honours are pretty much even between the two teams thus far in the competition with both having beaten all the other teams and, intriguingly enough, each having won on each other’s ice pad during the group stage.


The Raiders inflicted Grimsby’s only defeat home or away with an 8-10 win on the East Coast back in May before losing 5-6 at home in a game that they had led 3-0 at the end of the first period.


Both teams finished up with an identical playing record of “won 5, lost 1” but Grimsby topped the group on goal difference after a couple of landslide victories over short-benched visiting teams on their difficult home rink.


The top two sailed through the semi-finals - beating Blackburn Buccaneers and Wyre Seagulls respectively – and now meet in a one off game at a neutral venue to decide the winners of the play-off trophy.


The Manchester Mayhem Para Ice Hockey Team secured their place in the end of season play offs with a dramatic last minute victory over Peterborough Phantoms at Silver Blades Widnes on Sunday.


The game was very closely contested throughout and was a very entertaining spectacle for the sizeable crowd that had come to support the two very well matched teams.


After a very close opening phase, with both teams having numerous chances, Mayhem took the lead on 12.48 with a goal from Graham Wilson (assisted Ant Booth and Rob Allen) and then a goalless second period meant that the contest was still very finely poised at 1-0 heading into the final 15 minutes.


The Peterborough team – who had looked dangerous throughout finally broke down the stubborn Mayhem defence and fired in two goals in two minutes - both scored by Matt Coleman (36.59 & 38.18) – to take the lead with 7 minutes left to play.

It was beginning to look as if it wasn’t going to be Manchester team’s day as the clock ticked down towards the end of the game but then Mayhem’s Karl Nicholson pulled the home side back level with a superbly taken goal at 42.07 (assists Wilson & Booth).  With the score tied at 2-2 after 45 minutes regulation time, the game went into a 5 minute period of sudden death overtime – with the possibility of a penalty shoot-out if the scores were to remain level after that.


The overtime period was played at tremendous pace and the atmosphere around the rink was electric. Both teams had their chances but neither could make that all important breakthrough but then, just as it looked as if the match would go to penalty shots, Graham Wilson fired in the dramatic game-winning-goal for the Mayhem with just 24 seconds left on the clock.


The Manchester Mayhem are in action again in two weeks’ time - on Sunday 20th August - when they entertain league champions Kingston Kestrels in their final league game of the season at Silver Blades Widnes.  The game faces off at 6.30pm and admission is free.
You can find out more about the Manchester Mayhem Para Ice Hockey Club via their Facebook page:  HERE
Posted by Paul & Lucy at 12:43