On the night that the Great Britain team won the gold medal in Budapest and, with it, promotion to Pool A of the World Championships for the first time in 25 years, the Blackburn Buccaneers and Widnes-based Halton Huskies played out an exciting challenge game at Blackburn Arena on Saturday night, resulting in an 8-4 win for the home side.

The Buccaneers opened up the scoring with a goal within 90 second of the start from Simon Pickering and were 2-0 up after a strike from Mark Jenkins on 5minutes. The Huskies hit a goal back through Jeff Chapman-Watson with 9 and half minutes gone but the Buccaneers restored their 2-goal lead just 20 seconds later with a goal from Michael Walsh.

A second goal from Walsh on 15 minutes put the Buccaneers 4-1 ahead but a strike from Huskies’ Anthony Hughes kept the margin at two goals heading into the first break.

The Huskies upped their game in the second period but any chance of pulling themselves back into the reckoning were lost as the Buccaneers scored three unanswered goals between 27 and 32 minutes – courtesy of Scott Anthony-Jones, Karl Milton and Simon Pickering - to give themselves what would turn out to be an unassailable lead.

The Huskies then hit back with two quick goals of their own - from Jeff Chapman Watson and Michael Parkin – to bring the score to 7-4 but anther goal from Jenkins just 40 seconds later put the Buccaneers firmly in control.

Rather unusually, the last 25 minutes of the game were played out goal-less and the scored remained 8-4 to the Buccaneers at the end of 60 minutes.

The two teams meet again in the return fixture on Sunday 17th June at Planet Ice Widnes – 7.30pm face off.

Mayhem Lose Out To Kestrels In Sledge Season Opener 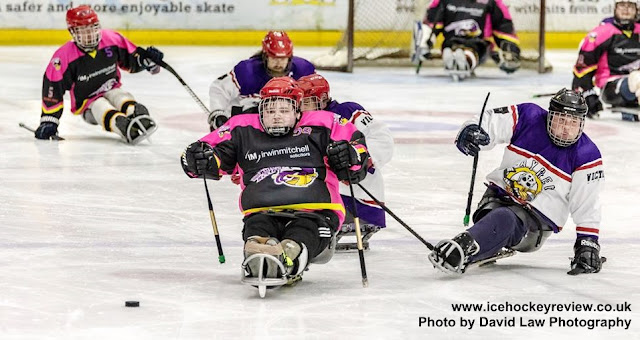 The Manchester Mayhem sledge hockey team slumped to a disappointing 1-9 defeat in the opening game of the 2018 British Para Ice Hockey League season against the Hull-based Kingston Kestrels at Planet Ice Widnes on Sunday.

The game saw last season’s play off champions, the Mayhem, paired up against last season’s league title winners - the Kestrels - and was expected to be a cracking curtain raiser for the 2018 season, which is played throughout the summer months.

With the sport having received a lot of TV exposure at the recent Winter Paralympic games in South Korea, there was a good sized crowd in attendance but nothing seemed to go the way of the home team.

After a close start, the visitors scored the opening goal after 5 minutes of play and led 0-3 at the end of the first period. It was 0-5 at the end of the second period but a goal from the Mayhem’s Anthony Booth at the start of the third gave the home side some hope of a late revival.

Unfortunately, it was not to be and 4 unanswered goals for Kingston - all scored by Matt Clarkson to add to his earlier 3 – fired the visitors to a comprehensive victory. The other two goals for the Kestrels were scored by Matt Woollias.

The Mayhem’s next game is away to Peterborough Phantoms on Saturday 12th May.

The Widnes – based Riverside Raiders team got their Summer Cup campaign off to a winning start with an 8-2 victory over the Sheffield-based Steel City Hawks at Planet Ice Widnes on Sunday.

The Raiders came second in the league competition last year and won the play off final and are hoping to do the double this time around.

The Widnes-based team were the stronger early on and took the lead after just 2 minutes with a great strike from Eemeli Vuorihovi. The visitors fought back and had several good chances themselves but were continually thwarted by Mike Rogers in the Raiders’ goal.

Two goals just 15 seconds apart from the Raiders just after the 10 minute mark gave the Widnes team what would turn out to be a winning margin as first Adam Murphy and then Vuorihovi again found the back of the Hawks net.

A brace from Jordan Birtwistle finished off the scoring for the period and gave the Raiders an impressive 5-0 lead heading into the first break.

The Raiders maintained the pressure on the Hawks’ goal in the second period and were 7-0 up – courtesy of goals by Rasti Geroc and Luke Williams – before the visitors finally opened their own account with a powerplay goal from Matthew Smith in the 39th minute.

The Hawks pulled a second goal back just two minutes from the restart through Joshua Connolly but the Raiders’ 6-goal margin was restored just 37 seconds later with a goal from Adam Jenkins.

The remaining 17 minutes were played out goal-less but with both sides pushing right up to the final buzzer - and Michael Howells performing well in the Raiders' goal, having come on for the third period.

There was a very impressive 100+ crowd watching the game and the sizeable Widnes contingent will have gone home happy with the resulting 8-2 scoreline.

A bucket collection was made at the game in aid of two mental health charities MIND and CALM, in support of a charity match that was being played at Blackburn Arena on the same day in memory of Wyre Seagulls and Blackburn Falcons rec player Rob Craig who died last year.

The Raiders’ next Summer Cup game is away to the Wyre Seagulls in Blackburn on 21st April and they are next at home on Sunday 6th May when they entertain the Flintshire Phantoms at Planet Ice Widnes.