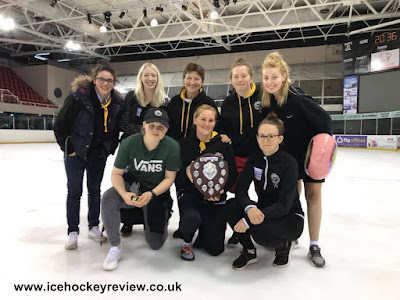 The Widnes Wild women’s team are recruiting for the 2018/19 season and are keen to attract new players as well as a new head coach.

The Wild Women play in the EIHA’s Women’s Premier League and are the only women’s team in the north west to play at that national level.

They have been in the WPL for three seasons, qualified for the end of season play offs in two of those years and finished runners up in 2015/16.

While, obviously, wishing to remain competitive, the Wild women are keen to encourage new talent and nurture prospective players. As such, last season saw them hand WPL debuts to a number of players who had never played senior league hockey before, coming from backgrounds such as junior teams elsewhere, university hockey or even roller hockey.

There is a wide range of ages and experience on the current Wild women roster with players aged from 15 to 60 - and seasoned internationals sharing line duties with season debutants.

The Wild women are also looking for a new Head Coach for the 2018/19 season.
The requirements are as follows:
Must hold a valid EIHA Level 2 licence.
Ability to plan and lead weekly training sessions, with the support of Assistant Coaches.
Available to travel with the team to bench coach a 14-game season (7x home, 7x away).


On A Personal Note:
A lot of people don’t realise there is such a thing as women’s ice hockey and those who do are often disparaging about it for one reason or another. 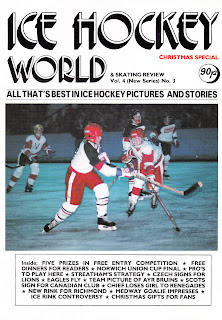 I have always been interested in women’s hockey – dating right back to the days in the 1980s when the Peterborough Ravens were early English league champions.

In fact, the rec team that I used to play for had regular "friendly" games against the Ravens - although these were anything but friendly and usually ended up with us getting battered both physically and score-wise!

Women’s hockey isn’t quite that aggressive these days and is played on a "non-checking" basis. While it may come across as tame in comparison with men’s league games, this means that there is a lot more emphasis on skating, passing and positioning techniques, which in a lot of ways makes the games more interesting. There are not so much stoppages, less niggly posturing and arguing and the game flows much more freely.

I have been reporting on the Wild women’s games since they started playing at Widnes three years ago and can safely say that I enjoy those matches just as much as the Wild NIHL games.

If you have the chance to go and watch a women’s game at your local rink, do go along and give them your support. There are many women’s teams across the country playing in Elite League, Premier League and D1 North & South and also U16s teams in some areas as well.


The Halton Huskies played out a thrilling and closely fought 6-6 draw with the Blackburn Buccaneers in a challenge game at Planet Ice Widnes on Sunday.

The visitors scored first after just 2 minutes with a goal from Patrick Thompson but James Kelly equalised for the Huskies with a well taken short handed goal after 15 minutes for a score of 1-1 at the end of the first period.

Josh Grocutt fired the Huskies into the lead with another shorthanded goal just 43 seconds into the second period but Buccaneers’ Captain Michael Walsh equalised some 4 minutes later to tie the scores again at 2-2.

The Huskies moved up a gear after this and scored 4 unanswered goals – from Kelly (2), Grocutt and Jeff Chapman Watson – to lead 6-2 at the end of the second period.

The third period was very tense and remained goal-less until the 49th minute when the Buccaneers took advantage of a delayed penalty call and Raivis Apfelbaums scored to give them a lifeline back into the game. A second strike from Apfelbaums just 3 minutes later pulled the score back to 6-4 and the Buccaneers visibly upped their game.

The Huskies began to look tired in the latter stages and tried valiantly to defend their lead against the resurgent Buccaneers but goals from Michael McLoughlin on 55 minutes and Matthew Patterson on 56, tied the score at 6-6, setting up a nail biting finish.

As it was, there was no more scoring and the 6-6 result was a fair reflection of the game overall.


The Widnes-based Riverside Raiders lost out 3-12 to league leaders Wyre Seagulls in their Summer Classic match at Planet Ice Widnes on Sunday.

The opening stages were, in fact, very close and it took until the 10th minute for the deadlock to be broken when Kieron Hardman put the visitors in front. Laurence le Vay equalised for the Raiders just two minutes later but any hopes of a close game were dashed when the Seagulls scored 4 unanswered goals – from Christian Wareing, Matthew Hook, Nicholas Hageman and Dan Coxon – to take a 1-5 lead into the first break.

Unfortunately for the home fans, that trend continued into the second period with the Seagulls hitting 3 more (Hardman x2 and Adam Fleet) before Jack Walker steadied the Raiders’ ship with a goal on 27 minutes.

The Seagulls restored their 7-goal advantage just 20 seconds later with a second goal for Fleet and Mark Jenkins made it 2-10 with just 33 minutes gone on the clock.

A second goal from Jack Walker gave the Raiders something to cheer about on 35 minutes but things didn’t look particularly promising for the home side as they trailed 3-10 at the end of the second period.

The flow was stemmed somewhat in a rather physical third period which saw a spate of penalties being called for body checks on both sides and, at one point, six players were sitting in the penalty boxes.

Powerplay goals from the Seagulls – scored by Hook and Ryan McNeill - rounded off the scoring for the game and the 3-12 victory consolidated the Wyre Seagulls’ position at the top of the Summer Classic league table.

The Raiders have two games – both in Sheffield – in the coming weeks as they play the Steel City Hawks away this Sunday 24th June and then face the Sheffield Ice Tigers the week after on 1st July.

They are next at home – for their last Summer Classic group game - on Sunday 29th July when the play the Hull-based Kingston City Knights at Planet Ice Widnes.

Local rivals the Deeside-based Flintshire Phantoms and Widnes-based Riverside Raiders played out a fascinating and highly entertaining game in the Summer Classic cup on Sunday, with the North Wales team coming out 7-5 winners.

Holding the higher place in the league table and having already won 0-6 away in Widnes back in May, the Phantoms went into the game with the upper hand but the Raiders were hopeful of taking back local bragging rights and the result was a finely balanced and closely fought encounter.

The Phantoms opened the scoring after 4 minutes through Ken Valyear but Mike Teinert equalised for the Raiders just 3 minutes later. A goal for George Perrett handed the hosts a 2-1 lead heading into the first break but another equaliser – from Mike Filek just 4 minutes from the restart - put the Raiders back on level terms.

Three straight goals for the Phantoms – from Jason James, Valyear again, and Ondrej Liebelt gave the Flintshire team a significant advantage and they led 5-2 after two periods.

A goal from Jack Walker after 45 minutes gave the Raiders hope of a late surge but they were pegged back again by a David Meadows strike on 48 minutes to make the score 6-3.

Walker struck again just 40 seconds later to drag the score back to 6-4 but Robin Spencer restored the 3-goal cushion with a goal on 52 minutes.

Laurence le Vay rounded off the scoring with a 5th goal for the Raiders on 58 minutes and a bit of pushing and shoving at the end saw misconduct penalties being handed out to Phantoms’ James Ashbrook and Raiders’ Ben Donkin.

The Raiders have an early chance to put Sunday’s defeat behind them when they entertain league leaders Wyre Seagulls this Sunday 17th June at Planet Ice Widnes. The game faces off at 4.30pm and admission is free.

The same evening, the Halton Huskies take on the Blackburn Buccaneers at Widnes in a challenge game. That game faces off at 8.30pm and admission is also free.

The Flintshire Phantoms are away to the Altrincham Aardvarx on Saturday 23rd June in a challenge game and are next at home the next day when they entertain the Sheffield Ice Tigers at Deeside Leisure Centre on Sunday 24th June.