NIHL & WNIHL Player of the Month Awards For October 2019 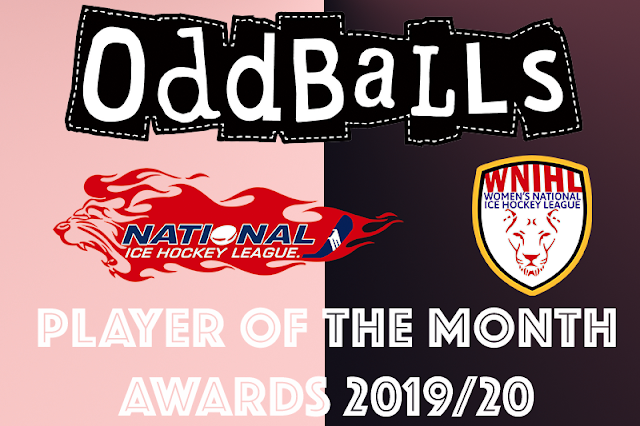 The English Ice Hockey Association has announced the October Players of the Month for its senior leagues, presented in association with OddBalls – the underwear brand everyone is talking about.


October’s awards are the second of the season for NIHL but a first ever award for our women’s leagues, the WNIHL. Each winner will receive a distinctive OddBalls “Obble” hat courtesy of our sponsor.


The roll of honour for October 2019 is as follows:

First of all in the NIHL National Division, our October winner is Adam Barnes of Leeds Chiefs. Barnes has become a clutch player for the Chiefs scoring at least a goal in every game this month, including the game winning goal to lift the Chiefs out of tenth place in the league.
Also nominated in the NIHL National: Michal Klejna (Basingstoke Bison) and Jordan Marr (Peterborough Phantoms).

The top division of the WNIHL is the Elite League, and our first WNIHL Elite Player of the Month is Louise Adams from Guildford Lightning. Adams is recognised for her commitment to the team, leading in the locker room and on ice. Excellent performance on ice – not just for the team but is an inspiration and mentor to the younger athletes stepping up to the Elite League.
Also nominated in WNIHL Elite: Alana Clare (Solihull Vixens) and Danni Newlove (Kingston Diamonds).

In NIHL Division 1 North the award goes to Gary Russell of Solway Sharks. ‘Rusty’ made a return to NIHL this season after a spell in Elite League with Glasgow Clan and he has backstopped Sharks to an unbeaten month in League and Cup, with .919 save percentage including one shutout
Also nominated in NIHL N1: James Moss (Billingham Stars) and Tomaš Rubeš (Billingham Stars).

WNIHL Premier League is the second tier of the women’s leagues, and the first player of the month for that division is Steph Towns of Whitley Squaws. Towns stepped up to be player coach and over the summer took on recruitment and sought game sponsorship to enable team to continue in the Premier League. Towns gives 100% effort on and off ice and support to new and experienced players, encouraging the team to continue playing to their best ability right to the last whistle.
Also nominated in WNIHL Premier: Phoebe Mather (Kingston Diamonds).

Player of the month in NIHL Division 1 South is Streatham’s Vanya Antonov. Antonov has helped the High Road club to a perfect 5&0 record in the month with seven goals including a hat-trick, while also stepping up to the National division with Bracknell Bees when available.
Also nominated in NIHL S1: Grant Bartlett (Chelmsford Chieftains) and Ben Ealey-Newman (Bracknell Hornets).

Division 1 of the WNIHL is split into a north and south division. October’s player of the month in the North is Katie Russell of Solway Sharks Ladies. Russell has shown dedication and hard work in training on and off ice. Although she lives two hours from the rink she never misses a single session. She encourages new players, assists coaches in demonstrations and also coaches pee-wees at both Greenock and Braehead.
Also nominated in WNIHL D1N: Anne Maclean (Telford Wrekin Raiders).

Division 1 South’s inaugural WNIHL Player of the Month is Ceri Powell of Coventry Phoenix. Powell retired a few years ago but has come back this year fitter and faster. She takes off ice fitness sessions for the Phoenix, and encourages younger players while working hard for the team on and off the ice.
Also nominated in WNIHL D1S: Elise Willoughby (Slough Sirens) and Courtney Lewis (Solent Amazons).

NIHL Division 2 North has named Richard Haggar of Hull Jets as the October player of the month. Haggar has helped lead the Jets to the top of Laidler division with four wins from five games in the month. Bringing experience to the lineup, Haggar has contributed on the scoresheet too with six goals and nine helpers in October including a 4+3 game in Deeside.
Also nominated in NIHL N2: Kieran Beach (Hull Jets) and Oliver Hunt (Telford Tigers 2)

WNIHL’s U16 division is also split north and south and there will normally be a single award for this division. However the October nominees were so evenly matched it was decided to recognise them both.
Both winners are up and coming netminders playing for club and Conference teams. In the North the winner is Emily Johnson of Kingston Diamonds. Emily is in her first season at U16 and picked up a shutout in her second game – a bright star for the future for sure.
In the South our winner is Kayla Poole of Swindon Top Kittens. Kayla is a consistent with a 90+ save average in net. She always gives her best even when the team is being out shot. Kayla always encourages all new players to have a go.

Finally in NIHL Division 2 South, our October winner is Kevin Lake of Invicta Mustangs. Lake is captain of the Mustangs and has lead from the front this month as Invicta went 4&0 in league and cup competition. Lake has potted three goals but added an impressive ten helpers to the cause.
Also nominated in NIHL S2: Jake Luton (Invicta Mustangs) and Haydn Wooton (Guildford Phoenix).
Congratulations to all winners – the OddBalls Obble hats are on their way!
If you want to get your own OddBalls merchandise give them a visit at www.myoddballs.com – new ranges launched this month include, fittingly, umbrellas and towels. Bespoke items are also available if you want to personalise items with a logo or name.
And remember all funds raised by OddBalls go towards their campaign to raise awareness and support for testicular cancer. Their ranges now include items for women, teens and children so there’s plenty to choose from.
Posted by Paul & Lucy at 14:10