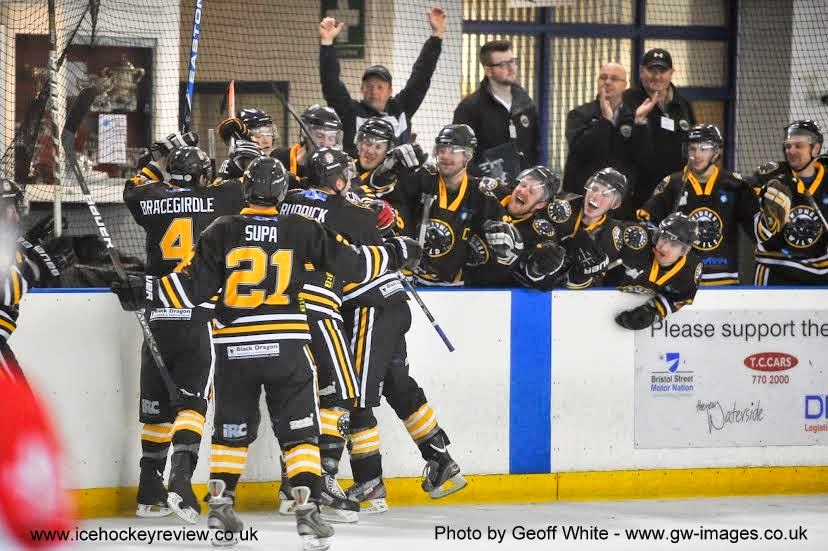 Laidler Conference Play Off Semi Final - By Dick Gillingham
Glorious in defeat sums up a mighty Widnes Wild play off performance. After several severe maulings by the Barons, Wild produced the performance of the season, urged on by their big travelling support. Widnes were short of big defencemen Troy Evans and Tony Melbourne. Former Great Britain defenceman Phil Lee got a surprise recall for the Barons. Widnes took to the ice in their now familiar black away strip.
The game opened at a furious pace with Solihull moving the puck around quickly. Greg Ruxton in the Widnes goal had to be at his agile best to prevent an early score. Wild were also playing with great confidence. Filip Supa beat the defence along the boards and as he took the puck behind the net, he seemed to take a hit from behind, falling and incurring a nasty hand injury. The injury affected his contribution but he bravely battled on ,closely marked by the Barons defence. Out of the blue, the puck found Josh Bruce free on the right and he fired into the right corner to put the Barons ahead in the 12th minute. A period of Solihull dominance saw Ruxton pull of a series of marvellous close range shots when screened by attackers. Solihull went further ahead when Wild  found themselves shorthanded. Sharp pasiing saw the puck moved out to giant defenceman Perry Doyle, who crashed a low shot past Ruxton.
The second period saw the visitors stepping up the action. First Ken Armstrong and then Bobby Caunce broke clear only to see shots saved. The increased pressure from Wild, saw Barons serving a series of penalties with Supa and Dipnall both tripped as they attacked. Josh Bruce received a serious arm injury after a late challenge on Ruxton
Widnes finally got on the scoreboard at 29.15, a Bobby Caunce shot being tipped out of the air by Ben Brown. The goal lifted the team and fans , with an incessant chant of Widnes ! Widnes ! ringing out round the rink. A controversial disallowed Widnes goal, brought anger from spectators - the puck clearly having crossed the line. It only delayed the inevitable and leading scorer Bobby Caunce was sent clear, cooly beating the Solihull net minder to put the sides level at 32.40. Both netminders produced excellent saves with Supa and Preston prominent for Wild.
It didn't take Solihull long to regain the lead, Edward Eaton firing home from close range at 41.53. Immediately Bobby Caunce broke clear but his final pass was wasted in front of the Solihull goal. Tempers were flaring up and Dan Bracegirdle and Joe Henry had an altercation in the 50th minute Aled Roberts, having a fine game in an unaccustomed defensive role, put Lee Pollitt away and the young forward beat three defenders brilliantly to finish cleverly for a Wild equaliser at 51.34.
There followed minutes of high tension with both sides keen to avoid a crucial mistake. Tired legs were creeping in and the deadlock was broken when the Barons Ryan Selwood fired a high shot past the misighted Greg Ruxton at 53.42.
With Widnes on the powerplay and committed to all out attack for an equaliser, star American Michael Rodger burst away from his own end to beat Ruxton with an unstoppable shot to the netminders left in the 58th minute. Despite continuous pressure Widnes couldnt score again, with the best performance of the season ending in a painful defeat.
This play off semi final defeat sent out a clear message that Widnes have certainly arrived and will be a serious threat next season. To have reached a play off position in the first season has been a great achievement from a young team moulded by Head Coach Mark Gillingham and his coaching team. With crowds amongst the best in the league and a highly professional media and merchandising team under team manager Mick Caunce and Chairman Matt Lloyd, fans are already looking forward to the new season.
Fans can keep up to date with close season activities via the website, local press and social media. An exciting 4 on 4 closed season evening tournament is planned for May and June and pre season warm up games are planned. Season tickets are still on sale, with details available from the Silver Blades Rink.