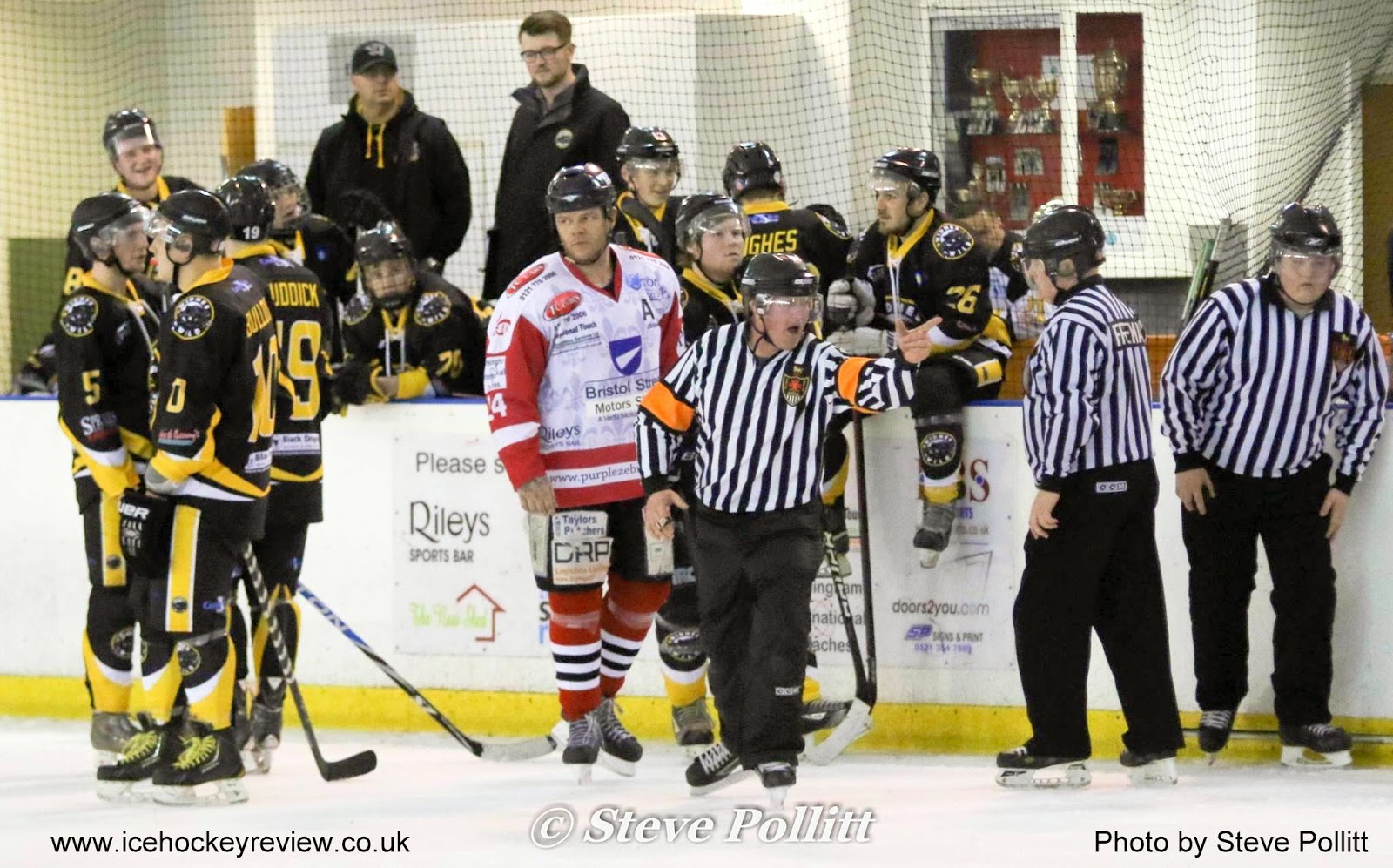 Widnes travelled to Solihull for the Play Off weekend, meeting the hosts Solihull on Saturday evening. A number of players were unavailable due to injury and family commitments. Next week's double header promotion play off with Whitley Bay was also at the forefront of club officials minds.
The game opened at breakneck speed with both netminders making good saves. Wild were struggling to cope with the movement of the Solihull forwards. Tom Jackson took a heavy check on the boards behind the Wild net. After a delay play resumed and in the 2nd minute, Solihull took the lead. As the puck was deflected out , Eaton   fired a low angled shot inside the left hand post. Solihull went down to four skaters after a tripping penalty but despite constructive attack, Wild couldn't apply the finishing touch. After Ruxton had made a great glove save for the visitors, play switched ends and the puck was hooked off the line to prevent a Wild goal. At 12.03, Wild failed to clear the puck and Josh Bruce put Solihull two up with a powerful angled shot from the left. Both sides pressed hard and both netminders were in constant action.
The second period followed a similar pattern to the first. Daniel Bullock broke clear for Wild and his powerful shot was well saved at the right post. Greg Ruxton was coming under tremendous pressure and made a series of saves from close range shots. Wild finally got on the scoreboard at 25.41 when Daniel Bullocks low shot flew low into the net to bring the score to 2- 1. Almost immediately a long pass out of defence by Papps, led to a Solihull attack and Rob Eley  fired in from the left to make the score 3- 1. Ben Brown fired in two powerful shots for Wild, before Filip Supa brought Wild back to 3- 2 with a tremendous rising shot at 32.25 The goal brought the travelling Wild fans to their feet and their vocal and drum support spurred on the visitors. After sustained Wild pressure, Solihull came back into the game and went 4- 2 ahead at 37.22 with Eddie Eaton the scorer. With just a minute of the second remaining, Joe Henry made it 5- 2 with a superbly crafted goal.
The third period opened with Wild putting Hewitt in the Solihull net under constant pressure. It came as no surprise when the visitors scored on the powerplay, Filip Supa bringing the score to 5 -3 from a Lee Pollitt pass at 46.15.Solihull's reply was immediate and savage, as they scored two goals inside thirty seconds from Richard Slater and Thomas Soar. From this point , Solihull benefitted from having five more skaters available, enabling them to score 5 unopposed goals in the last eight minutes.
For threequarters of the game understrength Wild were a good match for opponents unbeaten all season. Shortage of key players and trying to avoid injuries before next week's vital promotion games with Whitley Bay also had an effect. Wild expect the return of four or five key personnel before next weekend.
Whitley Bay, one of the legendary names in British ice hockey, will pay their first ever visit to Widnes for the 1st leg of the promotion play off on Saturday evening - face off 17.30. Doors open at 16.30 and it is hoped that a capacity crowd will be present for the most important game in Wild's short history.

Report by Dick Gillingham
Photo by Steve Pollitt
Posted by Paul & Lucy at 19:19