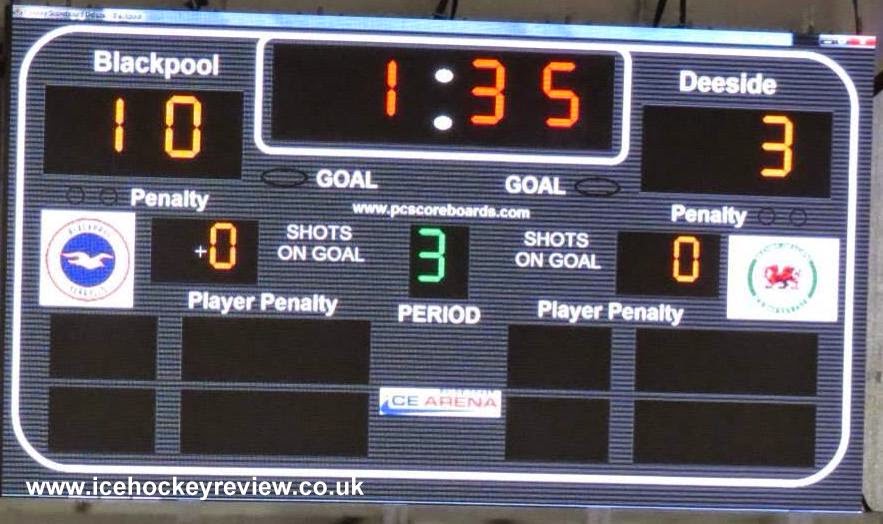 The Steve Swift Memorial Cup was awarded to the winning team after the game. (read more about that HERE )


It's 20 years since a competitive league ice hockey was played in Blackpool, but on Sunday the stars of the future took to the ice at the new Fylde Coast Ice Arena in their first home league fixture in the Under 16's North 2. Two weeks after their first game away at Sheffield, where a close game eventually ended in a 7-4 loss, the Seagulls were looking for their first points and their first silverware against Deeside.


Playing for the inaugural Steve Swift Memorial Cup, the home team took just 4 minutes to open the scoring through Jacob Lutwyche. Two minutes later the lead was doubled by Charles Ratcliffe. Blackpool were now finding their touch and two quick goals from captain Corey Swift with assists from Jimmy Bruce and Nathan Frankel in his first game for the club made the first period score 4-0.


The second period started like the first with Lutwyche opening the scoring with a solo effort before Alex Porter scored his first goal for the team assisted by Lewis Bennett. A goal from Deeside was soon followed by a second from Ratcliffe rounding off the second period with a score of 7-1.


Final period and a second goal from Porter after 29 seconds, assisted again by Bennett, had the home team sensing a rout, but Deeside responded with 2 quick goals following a spell of pressure where the Seagulls struggled to get out of their own end. However, they managed to weather the storm and a debut goal from Nathan Frankel but any hopes of a comeback from the visitors well and truly to bed. The game ended as it started with a very well taken solo goal from Lutwyche to clinch his hat trick. Final score of 10-3 gave the home fans plenty to smile about.


Most Valuable Player awards went to Alex Porter for Blackpool and Billy Perks for Deeside. The Steve Swift Memorial Cup was presented to his son, Seagulls captain Corey Swift.


On the same night, the Seagulls under 10's made their first ever appearance in the cross ice version of the game at Blackburn.  Playing against teams from Manchester, Telford and hosts Blackburn, the young Seagulls did exceptionally well. None of these players had played a competitive game prior to this, some have only just learnt how to skate. The coaching team was very pleased with the effort shown by all and was happy to see the players enjoying their long awaited first game.


***
The next home game for the Under 16's is Saturday 25 October against Solihull, with the Under 10's playing the following day against Blackburn, Deeside and Manchester. Supporters are more than welcome on both days.


Blackpool Seagulls are recruiting players of all ages, boys and girls. Training sessions are Monday and Thursday 6pm to 7pm for beginners who can skate to a required level. Hockey learn to skate courses are available on Saturday and Sunday mornings at Fylde Coast Ice Arena. Call 01253 590333 for details.
Posted by Paul & Lucy at 12:53