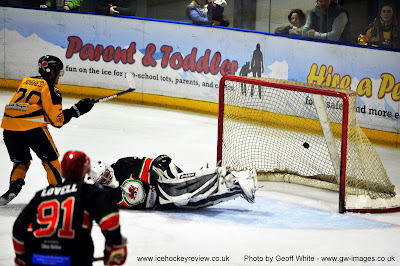 Wild met big local rivals Deeside Dragons on Saturday evening . A big crowd welcomed the teams.Wild were without Shaun Dipnall, Ken Armstrong, Nicole Jackson and Callum Ruddick. Sheffield Steeldogs Academy youngsters Josh Benstead and Tom Barry came into the team.
The game got off to an uneventful start, both teams taking minor penalties. In the eigth minute Widnes took a deserved lead, Chris Preston allowing Bez Jones to fire low past Matt Compton after the netminder had blocked the first shot. Deeside equalised in a sporadic raid, a break down the right by Lovell led to Parsons shooting past Ruxton. The Wild lead was restored at 17.15, Tom Ratcliffe finding the bottom left corner.
The 2nd period opened in sensational style - Widnes going 3 - 1 ahead at 21.57. Chris Preston was the goalscorer assisted by Ratcliffe and Hughes. Wild had worked the puck well around the back of the net. Two minutes later a thunderous shot from the point by Wild's Tom Jackson was well saved by Compton.
Some sustained attack from the Dragons led to a succession of fine saves from Greg Ruxton.
The game started to see some aggressive play and Wilds Matt Wainwright was penalised for a high hit on Dragons James Parsons at 30.55. Within a minute Dragons Michael Jones took a major 2 + 10 penalty for a check from behind. After Greg Ruxton controversially flung his net off the mounts it was followed by a slash on the netminder from Simon Furnivall. A fight ensued in centre ice and Furnivall and Wilds Kieron Strangeway went to the penalty box. In the 36th minute James Parsons broke clear for the Dragons but Greg Ruxton kept his shot out.
The third period opened with both sides serving penalties but there was a renewed vigour in the Dragons performance.. There was more aggression and directness in their play. It came as no surprise when youngster Ross Kennedy fired in a shot from the left and it beat Greg Ruxton at 47.40 to put the Dragons just a goal behind. Immediately tempers boiled over and Dan Bracegirdle received 2+2+2 and Chris Jones for Dragons 2+2. Bracegirdle was adjudged to have prompted the incident with a cross check. Whilst shorthanded a Widnes breakaway saw a low shot flash past the left hand post..
When Dragons took a minor penalty Wild were able to find space and Lee Pollitt crashed home a fourth goal at 56.09. His rising shot flashed high into the net, prompting huge crowd celebrations. Sustained Widnes pressure saw a great bit of skill from Bobby Caunce. He managed to back stick the puck towards the top corner but Compton made a fine reaction save.A high sticking incident at 56.48 saw Deeside's Marc Lovell strike out but Bez Hughes was sent to the box for high sticking the Dragons forward. The penalty saw the home side trying to play out the game a man short - the growing confidence of the homesters seeing them safely through to the hooter.
This was a real crowdpleasing result - earning bragging rights in the local derby. Sheffield youngster Tom Barry deservedly took the MVP for Wild. The match - watched by the biggest crowd of the season, saw the Wild extend their unbeaten run to four games.
They face a really tough challenge at the weekend, travelling to in form Sheffield Senators on Saturday ( 19.30) and then to table topping Solihull Barons( 18.00) on Sunday.
Report by Dick Gillingham
Posted by Paul & Lucy at 14:17