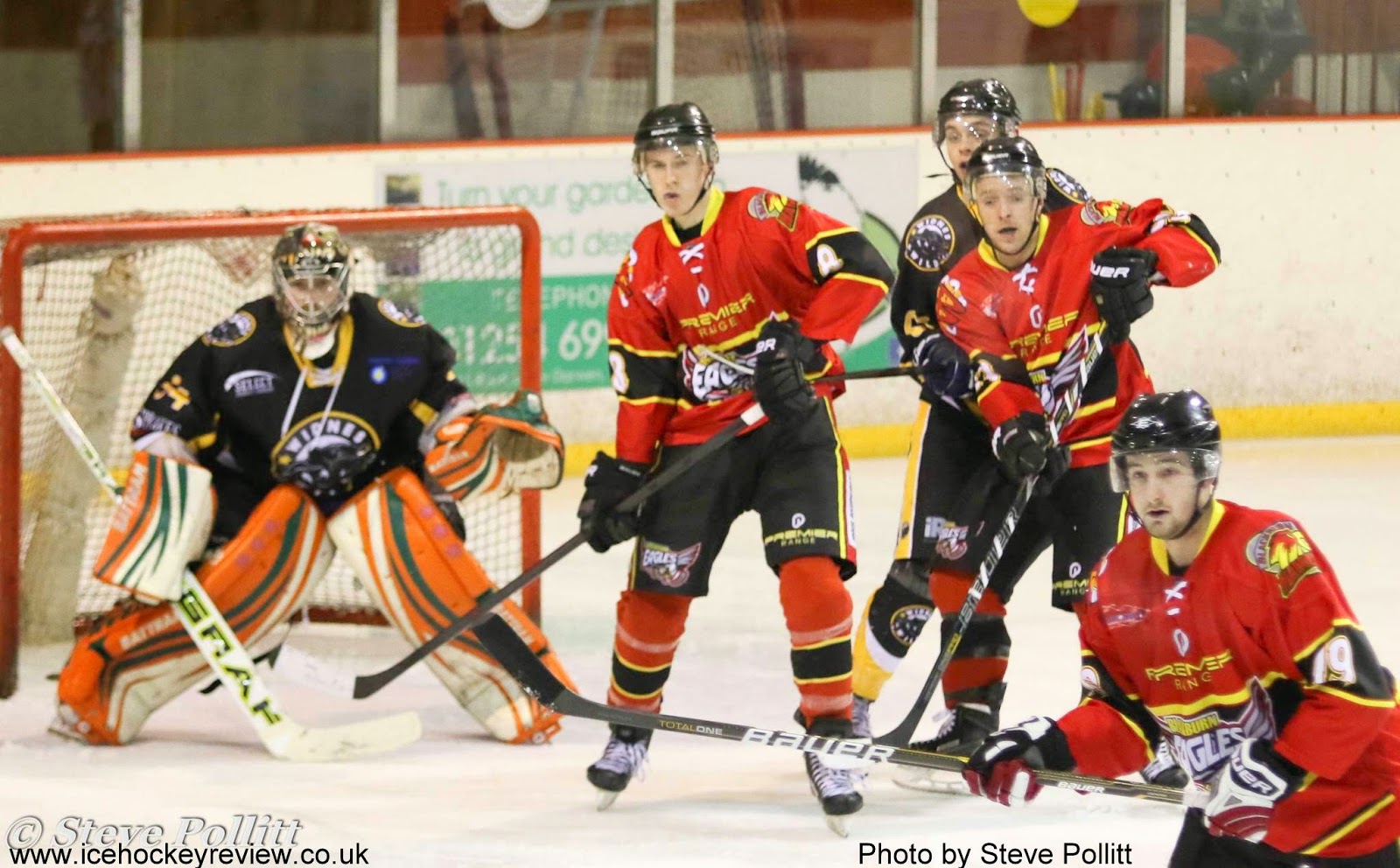 The pressures of a play off place was again a focus for players and fans, when Widnes Wild visited Blackburn Arena for the North West derby against the Blackburn Eagles. As with last weeks thriller at Nottingham, the visitors were down to a core of thirteen skaters with Greg Ruxton the sole netminder. The home side had eighteen outplayers and the experienced Phil Crosby in goal.


The match opened at a furious pace with Blackburn's big physical presence disrupting the smooth flow of the Widnes attack. It was the visitors who opened the scoring at 5.18 with Filip Supa and Lee Pollitt combining well on the right and allowing Shaun Dipnall to score from close in. Minor penalties against the home side gave the visitors numerical advantage, but the final pass or inaccurate shooting prevented them extending their lead. In the 10th minute extended Eagles pressure saw Greg Ruxton make a couple of excellent low saves. The pressure paid off and a defensive error on the right saw Wild disposessed and Jordan Ashington skating across the face of goal and beating Greg Ruxton with a reverse shot for the equaliser at 11.32. Wild stepped up a gear with Crosby making good saves from Brown and Supa. In a soradic Eagles attack Aaron Jordan hit a fierce shot from the left which crashed off the bar to safety. The period ended in controversy with Widnes finding the net on the buzzer, as the period ended. The 'goal' was ruled out, referee Andrew Miller ruling that the puck had entered the net after tbe buzzer had sounded.


The second period saw both netminders in early action with Supa and Vales prominent for the visitors. The home side stepped up the action, outshooting the visitors by two to one. Captain Matt Wainwright skated elusively through the Eagles defence at 36.40 but his shot was well saved. Two minutes later a Shaun Dipnall effort was well blocked by Crosby. As the period closed, some frustration was setting in for Widnes with solo efforts replacing a passing game as the team pressed for the lead.
The third period opened in sensational style - a speculative cross from the right taking a bizarre deflection off Greg Ruxton to give the home side the lead at 40.39. This spurred the Widnes fans, making up the majority of the crowd , into action and their ongoing support seemed to lift the team. A great break out from Filip Supa down the right, led to Tom Jackson firing in a powerful shot from inside the blue line.An apparent high elbow to the head led to further Wild frustration and Bez Hughes sitting a misconduct penalty at 43.10. Despite constant pressure from the visitors, Crosby made a series of vital stops. In an attempt to take something from the game, Wild called a time out at 52.19.

Desperate defence from the Eagles and minor penalties for charging and tripping saw Wild pressing and the equaliser came at 56.18 - a powerplay goal. Matt Wainwright and Shaun Dipnall combined for Filip Supa to find the net through a crowd of players around the net. Both sides seemed keen to retain a point but with just over half a minute remaining, sensationally, a penalty shot was awarded. With Crosby beaten, a defenceman prevented the puck crossing the line. After some confusion and a delay, Filip Supa, stepped up and as he veered to Phil Crosby's right the puck stopped in snow by the crease allowing the netminder to make a block.
Honours even then and it will be weeks before we can decide whether this was a point gained or a point lost ! Kieran Strangeway took the MVP for Wild and the team left the ice to rousing encouragement from the travelling support. The final period saw Wild outshoot the home side by 36 -14.

Report by Dick Gillingham
Photo by Steve Pollitt
Posted by Paul & Lucy at 16:32