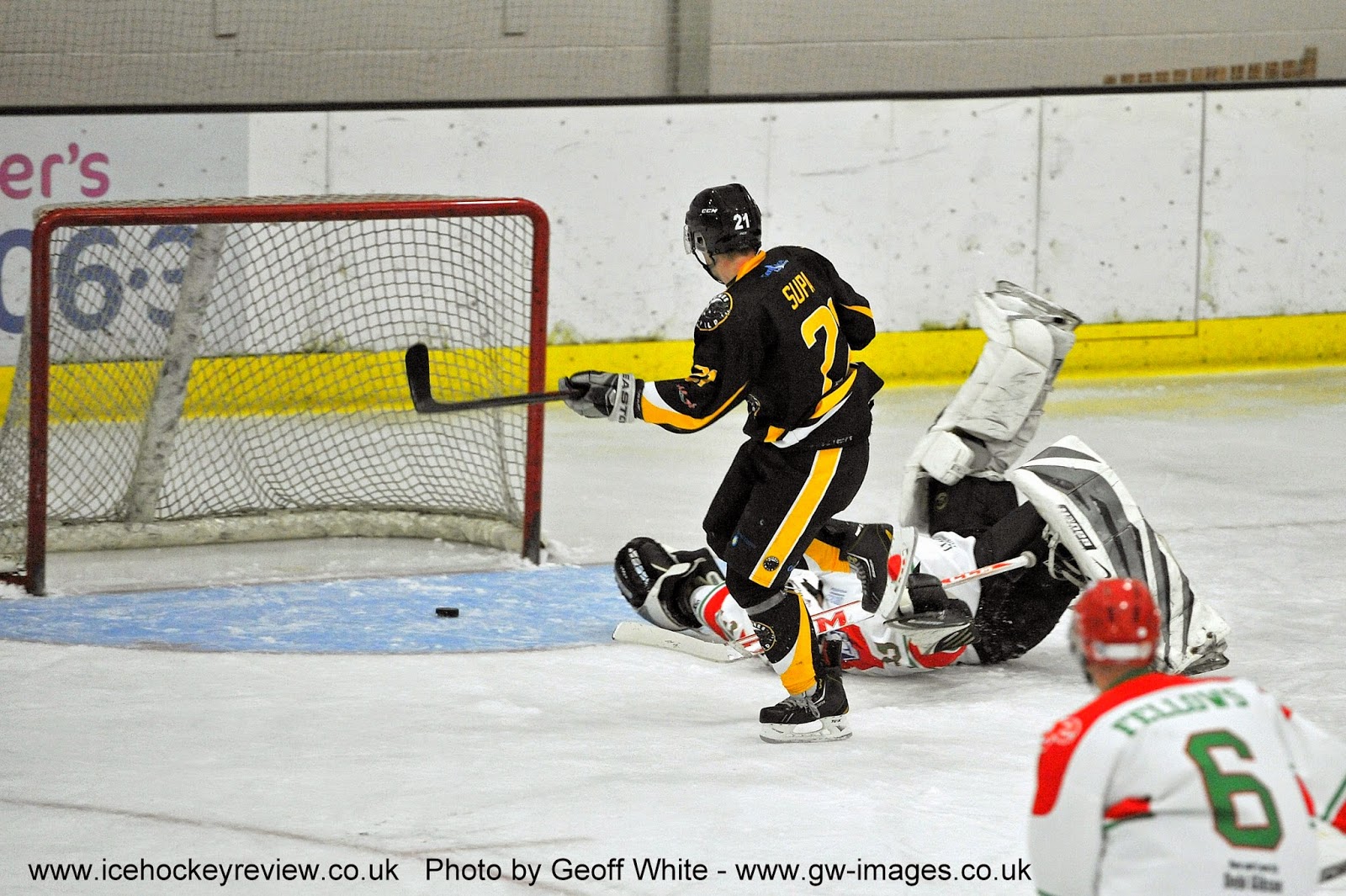 For their second visit of the season to Queensferry, Widnes welcomed back Pavel Vales, Sam Dunford and Tom Ratcliffe but Ken Armstrong , Ben Brown and Kieron Strangeway were unavailable along with Tom Barry. With Greg Ruxton injured and Nicole Jackson otherwise committed, Sheffield based junior , Josh Benstead was selected in goal.

As is expected of these derby games it opened at a breakneck speed but it was Wild first to test the netminder Dave Clancy. Shots from long range and from close in tested him but the game remained scoreless. When James Parsons took a penalty for boarding at 12.04, Wild took a deserved lead on the powerplay. The puck was worked round the net for Filip Supa to shoot high into the top left corner. Another Wild powerplay at 15.13 saw Shaun Dipnall thread the puck through to Bobby Caunce but his shot was saved at the foot of the right post.

Wild extended their lead at 15.43 when Lee Pollitt shot low from a Shaun Dipnall pass. Chris Preston took a 2 minute penalty for cross checking and young netminder Josh Benstead made two great saves from close in. Just before the first interval Pavel Vales and Simon Furnivall battled in the corner - both receiving 2 pls 2 for roughing.

The 2nd period began with Deeside having a 5on 4 powerplay.but within seconds Deeside took a high sticks penalty. At 22.04 wild went further ahead. Deeside netminder rushed out but his clearance was blocked. The puck was fed to Filip Supa who shot into an empty net from an acute angle on the right. Deeside were coming more into the game and keeping possession in the Widnes end. Josh Benstead made another great save blocking a fierce shot from point blank range at25.14. Both Sam Dunford and Matt Wainwright were sent clear for Widnes but their shots were well saved. Wild sent their noisy travelling support into raptures when they went 4 -0 ahead at 36.50. Tom Fielden got clear ,feeding Chris Preston. His accurate cross ice pass from the left was slotted home by Bobby Caunce.

Widnes had a rather lethargic look as the third period opened and it came as no surprise when Deeside opened their scoring in the 41st minute, James Parsons finishing well. Aled Roberts and Tom Ratcliffe had an altercation at 42.32 and went to the penalty box. Widnes were next to score a long shot along the ice from the left appearing to be deflected on the edge of the crease, at 43.44, by Filip Supa Deeside were now causing real problems for the Wild defence and the Dragons added a second goal, James Parsons firing in a powerful shot from the wing at 46.00.

Widnes went further ahead - taking advantage of a powerplay when Deeside took two slashing penalties. It was a beautifully executed goal with interpassing between Dipnall, Pollitt and Supa, the latter finding the net at 48.17. Within a minute Widnes had a seventh. Work round the net saw Supa feed Dipnall who slotted home at 48.59.This goal prompted a netminder change for Dragons, Matt Compton replacing Clancy Inside a minute, Deeside had scored a third, Alex Roberts fired in a powerful shot from just inside the blue line. Bobby Caunce was next to be put clear on the powerplay but Compton saved his shot. Tiredness and a lack of concentration was noticeable in the Wild defence and Marc Lovell shot home from the blue line for a fourth Dragons goal at 54.29. They added a fifth at 56.06, Parsons finishing in typical style after good work from Chappell and Lovell.

Fortunately a Deeside error allowed Filip Supa to break clear and round Compton for his fifth and Wild's eighth goal - shorthanded and absolutely crucial, after sustained Deeside pressure. After dominating the game for so long, there was great disappointment in conceding four late goals but that couldn't detract from a third win this season against last years second placed team.

For Wild there were outstanding displays from five goal Filip Supa and young netminder 17 year old Josh Benstead - in his first full senior game. Geoff Wigglesworth took the Wild MVP for a great show of hardwork and determination but the whole team can be proud of this memorable win. Mention must be made of the fanatical, noisy travelling support, who backed the team all the way to the final hooter. Four league points from a testing weekend was just reward for Wild.The team now have a well deserved break before the final pre Christmas fixture at home against arch rivals, Sheffield Senators, on 20th December.