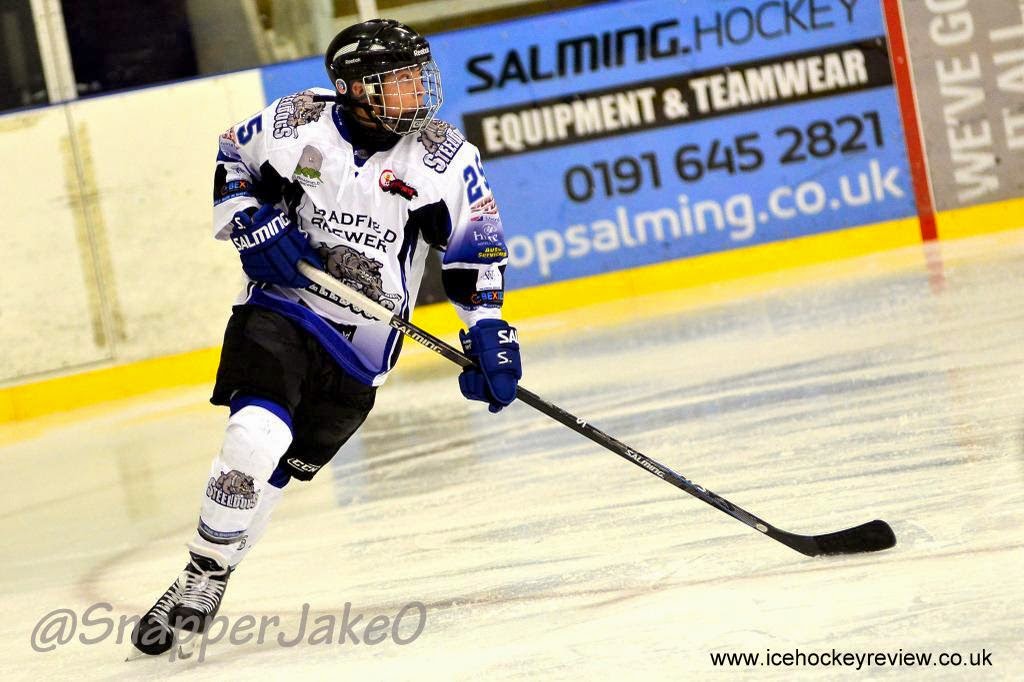 Sting in the Tail for Spartans
Sheffield Spartans were left kicking themselves after letting a winning position slip in the final seconds of the game to draw 4-4 with Sutton Sting. It was however a fair result in what was a great game of hockey.

In an end to end first period it was a close game with neither team really getting the upper hand until Sting took the lead on 16.01 through Vjaleslavs Movko. It was a disappointing goal to concede as Spartans defence were caught napping and left themselves wide open to allow Movko to take his chance well to score.

Spartans had a great chance to equalise whilst short-handed after Brandon Stones had been called for delaying the game for knocking the net off its moorings. Sting had the puck in the net but the goal was washed out with the puck clearly going in after the net was off. It was a strange call on Brandon in some regards with Sutton’s net being knocked off its moorings on a couple of occasions with play continuing for a few minutes with none of the officials noticing it, despite skating past it several times in open play. Spartans turned over possession and found Scott Morris in the clear only for him to be pulled back for which a penalty shot was called. Morris pulled Zimozdra out of position but couldn’t get his shot away on target. Sutton finished the period strongly and were unfortunate not to make it 2-0 with the post coming to Spartans' rescue.

Spartans dominated the first half of the period and went on to put themselves into a commanding position with three goals. Will Barron & Chris Wilcox combined well to set up Scott Morris to score a nice goal on 21.36 to draw level. Some good work from Ollie Barron on the powerplay set up Andy Turner to score on 24.39. As Spartans pushed forward Elliott Knell’s neat pass found Ollie Barron who made no mistake on 28.19 to make it 3-1. Whilst clearly on the up and in the driving seat Spartans pressed the self-destruct button to fail to react when under very little pressure as Movko found Mark Turner who’s half hit shot eluded Brandon Stones to go through his legs to concede what was a defensive howler.

This lifted Sting and they enjoyed a good spell to play some excellent hockey but Spartans defence were back on their game to deny them but were fortunate when John Ross couldn’t get his stick on the puck with an almost empty net at his mercy and a cracker of a shot came back off the piping. Spartans soaked up the pressure to finish the period strongly but couldn’t make their chances count this time, in particular the last minute or so whilst on the powerplay after Dmitri Zimozdra had eventually been called for delaying the game after deliberately knocking the net off its moorings one time too many. The period finished with Spartans 3-2 in front, arguably having just about done enough to say that they deserved to be.

It was however a very close game, a very exciting an enjoyable one too. It was there for the taking with some good hockey being played out and it was hard to predict which way it would go. This was also the case after Richie Oliver scored a nice goal to tie it up at 3-3 timed 44.23; a goal that you could sense was coming when it did. There was nothing between the teams from this point and just when it seemed we were destined for the last minute to be played out and settle for a point apiece the game exploded back into life. Some great individual skill from Ollie Barron created a chance from nothing for him to score a great goal on 59.12 and make it 4-3 to Spartans. As Sutton pulled their netminder for a numerical advantage Spartans put themselves under some needless pressure by continually icing the puck for face offs in their defensive zone. They paid the price when Sutton won possession to see Richie Oliver equalise from Simon Offord with just 12 seconds left on the clock. Spartans were guilty of making the wrong choices in what was a winning position to see them ultimately drop a point with a final score of 4-4.

However it has to be said that it was a fair result in the end, it would have been harsh on either team to have lost in what was a fantastic game of hockey and a great advert for the sport for which both teams deserve praise and credit. MVP was awarded to Cole Shudra whilst the impressive Vjaleslavs Movko won it for Sting.