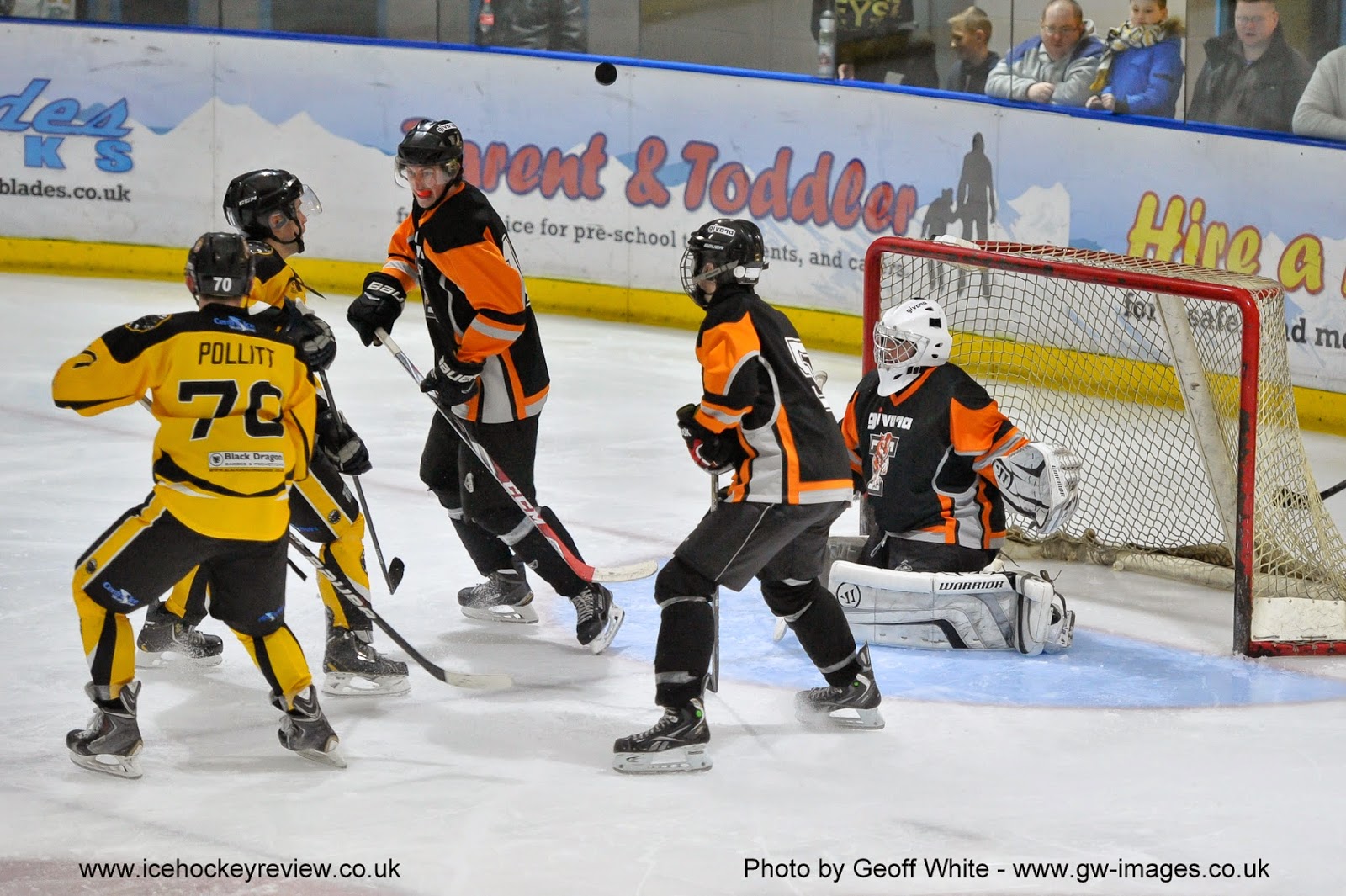 Telford Tigers made an early return to the Silverblades Widnes, still smarting from only their second defeat of the season in Widnes last week. Tom Ratcliffe, Kieron Strangeway, Tom Fielden and Nicole Jackson returned to a strong Widnes line up but Bobby Caunce was declared unfit with an ankle injury..

Nicole Jackson started in net for Widnes and the game opened at a frantic pace, with both netminders brought into early action. The Widnes forwards were combining well and several top saves from Bell prevented goals. Telford took a shock lead at 10.18. They worked the puck around the Widnes end and an accurate angled low shot from Daniel Croft found the bottom corner of the net. Great saves from Telford's Bell followed from Filip Supa shots. The Tigers stretched their lead at 18.56, a Widnes defensive error allowing Brad Betteridge to break clear and beat Nicole Jackson with a high shot. The first interval was marked with a charity Air the Bear, when the crowd flung dozens of teddy bears onto the ice in aid of a local childrens hospice.

The second period saw early pressure from the visitors and when Widnes were reduced to 4 skaters a Telford attack saw a tip in goal , high into the top left corner from Joe Aston at 24.09.

Telford took a 4 -0 lead at 29.08 - the puck being backhanded into the bottom left corner by Brad Betteridge. Widnes called a 30 second time out and it had an effect. They opened their scoring at 32.44 when Shaun Dipnall forced the puck low past Bell. Inside three minutes Widnes scored a second - a real quality finish from Lee Pollitt after good work by Supa and Dipnall. Telford came back with a fifth - a low shot from Betteridge beating Jackson at 35.12.

The third period followed a similar pattern with lots of energetic Widnes pressure and Telford systematically looking for a high attacker to punish Widnes on the break. However it was Wild who were first to score, Bell making a save from point blank range with the puck looping up and over his head into the net. The goal was awarded to Filip Supa at 46.06. Telford came straight back and an attack on the right saw Joe Aston beat Jackson with a low shot into the bottom corner. The next minute saw Pollitt win a face off in the Telford end and a fierce Dipnall shot well saved by Bell. Another defensive error from the Wild saw James Smith break away to beat Nicole Jackson to put Telford 7- 3 ahead. The goal signalled a netminder change for Widnes - Greg Ruxton replacing Nicole Jackson. A similar goal at 50.55 saw James Smith beat Ruxton inside the post.

An incident in the Widnes end saw Telford's Joe Aston and new Widnes signing Joe Greaves dropping the gloves and fighting. Greaves received a match penalty for a head butt at 52.08. Immediately Supa broke away and only a brilliant save from Bell prevented a Widnes score. More Widnes pressure brought a fourth goal at 58.53 - Shaun Dipnall forcing the puck under Bell from the edge of the crease.

This was a game highlighted by missed Wild scoring chances ( they outshot the visitors) , some great Telford netminding and defensive errors at both ends. Telford displayed some high quality finishing, which ultimately won the game. Shaun Dipnall took the MVP for Widnes for an impressive all action, goalscoring display.

Next weekend Wild travel to Blackburn on Saturday for the first time this season for a 17.45 face off. The following night, Sunday, they visit Deeside Dragons hoping for a third win of the season against their Welsh opponents. The game starts at 18.45.